New York state is teaming with General Electric Co. and other companies on a $500 million initiative to spur high-tech manufacturing of miniature electronics. 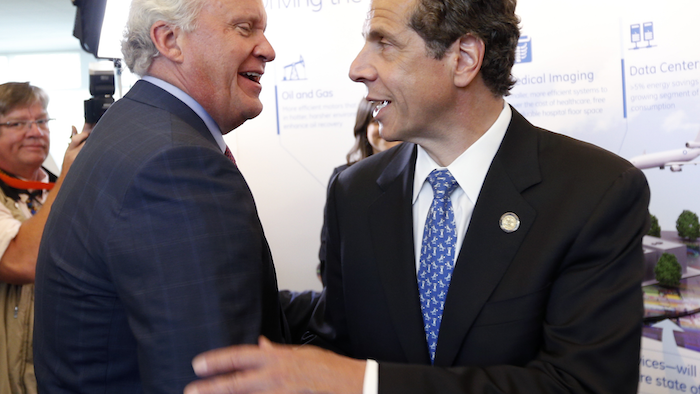 NISKAYUNA, N.Y. (AP) — New York state is teaming with General Electric Co. and other companies on a $500 million initiative to spur high-tech manufacturing of miniature electronics, Gov. Andrew Cuomo and GE CEO Jeffrey Immelt announced Tuesday.
The state will invest $135 million for the collaborative program, which will be based out of the SUNY College of Nanoscale Science and Engineering in Albany. Fairfield, Connecticut-based GE and other companies will contribute the remaining $365 million.
The work will focus on the development of new, smaller semiconductors for computers and technology used in many industries, including solar power, health care and aviation.
Immelt said small, powerful semiconductors will be one of a handful of technologies that "are going to define the next 20 or 30 years globally."
"This is going to be at the hub of creating jobs and industries in the future," he said at Tuesday's announcement, held at a GE research office.
The public-private partnership, known as the New York Power Electronics Manufacturing Consortium, will allow private companies to use the facilities at the state's nanotech campus in Albany. University researchers from around the state will also participate.
The idea is to use the state's nanotech facility to attract researchers and private companies to create a high-tech cluster in New York state.
"The businesses come for the facility and the equipment and the research and the businesses stay for the cluster of the companies that are all working on the project," Cuomo said. "The state finances the magnet that attracts the companies."
GE's work will focus on developing low-cost silicon carbide wafers, which are more efficient and powerful than traditional silicon chips. That means devices can be smaller and lighter than standard devices that use silicon.