Video gamers are an obvious target group for use, but businesses too are finding that combining wearables with augmented reality could solve practical problems. 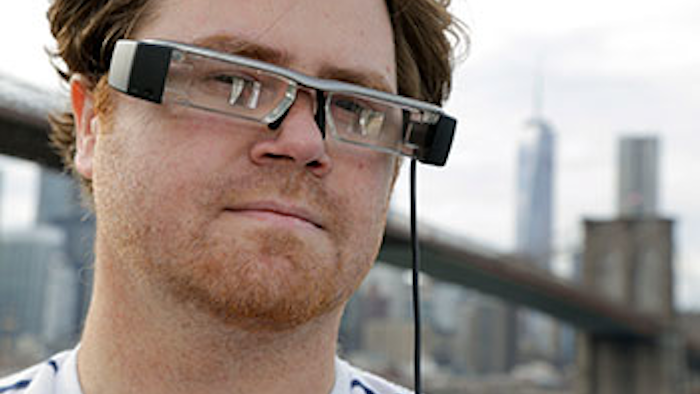 NEW YORK (AP) — Mark Skwarek is surrounded by infiltrating militants in New York's Central Park. He shoots one, then hearing a noise from behind, spins to take down another. All of a sudden, everything flashes red. He realizes he's been hit. The words "Game Over" appear before his eyes.

Skwarek is indeed in Central Park. But he's wearing a new set of Epson Moverio B200 glasses that allow an entire world of virtual characters, objects and structures to overlay and interact with his real environment through so-called "augmented reality." Skwarek has raised over $30,000 on the group fundraising site Kickstarter to launch Semblance Augmented Reality (AR). His company aims to liberate video games from the TV and turn them into physical experiences. He's poised to release Semblance AR's first app for iOS and Android phones.

Augmented reality isn't new. But it's hitting the mainstream thanks to the rising popularity of wearable technology like fitness trackers, smart watches and glasses. GPS tracking, sensors and camera technology on mobile devices are finally strong enough and widely available. Video gamers are an obvious target group for use, but businesses too are finding that combining wearables with augmented reality could solve practical problems. For example, crews needing to repair a complex mud pump on an oil rig could simply activate step-by-step visual instructions right in front of their eyes, hands-free, and in real time.

Wearables will empower the deskless worker the same way computers and mobile devices have done for the office worker, says Brian Ballard, CEO and founder of augmented-reality software company APX Labs in Herndon, Virginia. Wearables like smart glasses can make employees a kind of "instant expert" by giving them access to information wherever they are in real time and save time and money that is usually spent on separate training.

"You're giving an entire new class of workforce — that could be five or 10 times of (the number of people) you have people sitting at a desk — access to information," says Ballard, who previously worked on augmented-reality product development for the military. "That's fundamentally revolutionary."

"The technology is here right now. It's just implementing them in a product, showing consumers that it has a value and can do things better than they were doing before," says consumer tech analyst Benjamin Arnold at the NPD Group. "That's where I see the tipping point coming."

Samsung plans to sell a $200 Gear VR headset as an attachable companion to its upcoming Galaxy Note 4 smartphone. The headset, which can give people an immersive experience with concerts, aerial footage and games, has sensors to gauge the head's position and to tell the phone which part of a 360-degree image to display. The VR was developed with Oculus, which Facebook Inc. bought for $2 billion this year. Gamers have been using motion detection systems such as Microsoft's Kinect for the Xbox. And Apple Watch is coming out early next year, introducing even more consumers to wearables.

Battery life and Internet connectivity will need to be continually improved to make business use most efficient. But it won't be long before augmented reality becomes fully integrated into our lives and blurs the line between what's real and digital, says Ballard.

Millions Of Voiceprints Quietly Being Harvested