Still working to repair damage caused by his gaffe about women seeking pay raises, Microsoft CEO Satya Nadella has again apologized to employees and announced in a company-wide memo that all workers will receive expanded training on how to foster an inclusive culture. 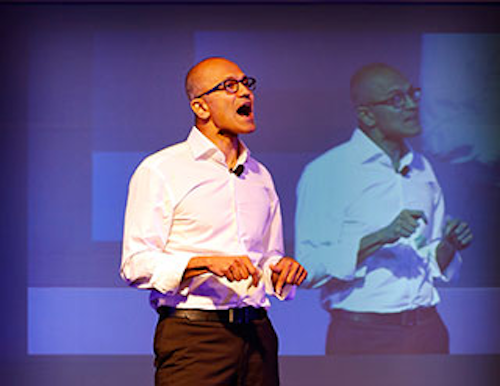 SAN FRANCISCO (AP) — Still working to repair damage caused by his gaffe about women seeking pay raises, Microsoft CEO Satya Nadella has again apologized to employees and announced in a company-wide memo that all workers will receive expanded training on how to foster an inclusive culture.

Microsoft's female employees in the United States earn 99.7 percent of what men earned in similar positions last year, Nadella said in a new memo to workers this week. He suggested that such slight variations are not unusual for "any particular group," but he added that he wants to increase the numbers of women and minorities in the company's workforce.

"We must ensure not only that everyone receives equal pay for equal work, but that they have the opportunity to do equal work," Nadella said in the latest memo, which was first reported by the tech blog GeekWire and confirmed as authentic by a Microsoft spokeswoman.

Nadella again apologized for his remarks last week at a women-in-computing conference, where he suggested that women don't need to ask for raises and should just trust that the system will pay them what they're worth. The comment drew immediate criticism, although Nadella later said he was repeating advice that he'd been given in his own career.

"It was a humbling and learning experience," Nadella said of the reaction to his remarks. He said in the memo that he realized his advice "was just plain wrong" and added: "Any advice that advocates passivity in the face of bias is wrong."

In addition to mandatory training on "diversity and inclusion," Nadella also vowed to step up efforts to "recruit more diverse talent to Microsoft at all levels of the company."

Microsoft reported earlier this month that 29 percent of its employees are women. That figure falls to 17 percent for management and engineering staff. While that's similar to numbers reported by some of its competitors, the entire tech industry has come under fire for not recruiting and promoting a more diverse workforce.

Will Apple Pay Be The Next iRevolution?