Microsoft shareholders gave a lukewarm vote of approval Wednesday for CEO Satya Nadella's $84 million pay package, after an investor advisory group said the company was paying him too much. 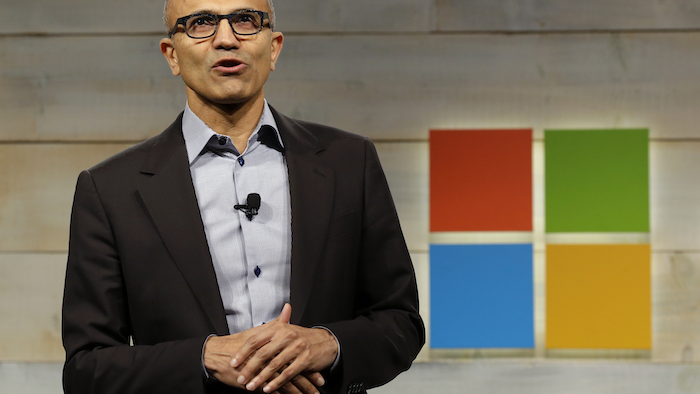 SAN FRANCISCO (AP) — Microsoft shareholders gave a lukewarm vote of approval Wednesday for CEO Satya Nadella's $84 million pay package, after an investor advisory group said the company was paying him too much.

Nadella's pay package puts him among the highest paid CEOs in the country for last year, although his pay as a first-year CEO falls short of the $378 million that Apple awarded to Tim Cook when he became CEO in 2011. Oracle CEO Larry Ellison was awarded stock options and other pay valued at $67.3 million last year. Former Microsoft CEO Steve Ballmer was paid only $1.3 million in 2013, but he held shares worth nearly $16 billion.

An advisory vote on Microsoft's executive pay program won approval from more than 72 percent of shareholder votes cast, the company said after its annual shareholder meeting on Wednesday. ISS, which reviews proxy measures for many large companies and criticized Nadella's pay, has said a vote below 70 percent is an indication that a company should review its policies. The vote fell short of the average support level of 91.5 percent for executive pay measures at other companies tracked by ISS affiliate, ISS ExecComp Analytics.

By comparison, more than 92 percent of votes supported the company's slate of directors, who ran without opposition.

That doesn't mean investors are overly concerned, according to Wall Street analysts, who say Nadella is generally viewed as moving Microsoft in the right direction.

"He probably would have taken the job for less, so from that regard they are certainly not exhibiting frugality," at a time when Nadella is overseeing a reorganization that includes cutting 18,000 jobs, said Colin Gillis of BGC Financial. But he also pointed to the 30 percent increase in Microsoft's stock price this year and said, "I think that's the primary metric most people care about. If you think about the billions in value that's been created, this is a tiny fraction of that."

Most of the meeting was devoted to a recap of Microsoft's business strategy and a discussion about diversity. Executives heard a presentation from civil rights leader Jesse Jackson, who has been urging the tech industry to hire and promote more women and minorities. Nadella repeated an earlier pledge to make that a priority at Microsoft. While the Redmond, Washington company has previously disclosed some workforce statistics, Nadella also promised to release more detailed figures this month from a report that employers must file annually with the federal government.

Nadella's pay largely consists of stock grants that won't vest before 2019, and Microsoft has said they are an incentive for future performance, since his stock will increase in value if the company does well. Nadella was paid a base salary of $918,917 and a $3.6 million bonus, along with stock grants valued at $79.8 million.

That includes a one-time stock grant valued at $59 million when he was promoted to CEO, and an earlier grant valued at $7 million for his performance as executive vice president before he became CEO. It also includes stock valued at $13.5 million that he was granted when Microsoft gave top executives "retention" awards to keep them from jumping ship while the company searched for a successor to Ballmer. Under securities rules, companies must report an estimated value for stock at the time of a grant, even if it can't be exercised right away.

In a report last month, ISS questioned the company's decision to give what it called a "mega grant" of stock up front, since Microsoft also planned to award Nadella a subsequent annual grant valued at $13 million in the next fiscal year. ISS also said the company should adopt stricter performance standards for executive compensation.

Microsoft Chairman John Thompson said the company wanted to "attract and motivate a world-class CEO." Thompson said the package is tied to performance and "motivates our CEO to create sustainable long-term shareholder value by providing him with the opportunity to share in those gains and build ownership of the company over the next seven years."