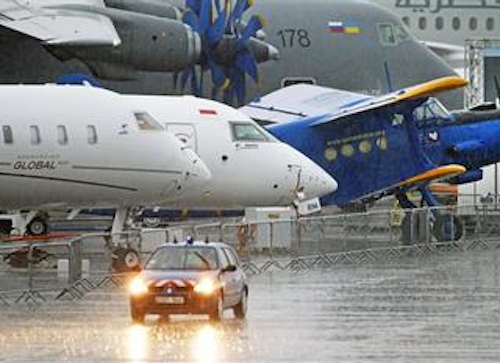 LE BOURGET, France (AP) -- Airbus and Boeing both won pledges for big purchases of long-haul, wide-body jets Monday, as the Paris Air Show got off to a robust if rainy start.

Boeing announced a promise to by 10 of its 787 jets from GECAS, the aircraft leasing arm of General Electric. Those would be worth more than $2.4 billion at list prices, though customers often negotiate deep discounts. GECAS is ordering the new version of the 787, dubbed the Dreamliner, the 787-10X.

Qatar Airways also put in orders for Boeing's other long-haul aircraft, the Boeing 777.

Meanwhile, Airbus announced a potential order Monday for its superjumbo 800-passenger A380 jets, which has seen disappointing sales in a time of economic slowdown. Doric Lease Corp., signed a memorandum of understanding for the purchase of 20 A380s. That deal, if confirmed, would be worth $8 billion at list prices.

Airbus is also hoping to attract attention to its new wide-body A350 aircraft, which had its maiden flight in France last Friday and can carry up to 440 passengers. The A350 is Airbus' best chance to catch up with Boeing's 787 and 777 — which carry up to 300 and 365 passengers respectively — in the race to sell planes used on long-haul flights.

Fernando Alonso, head of Airbus' flight test division, said Monday that the A350 first flight went exactly as the simulator had predicted, and just like Airbus planes currently in operation. That's a selling point for airlines reluctant to take the time or expense to retrain pilots.

At a time when fuel costs are a major concern for airlines, many have wondered if the A350, which makes extensive use of fuel-friendly lightweight carbon fiber, would give Airbus a jump on Boeing. But Ray Conner, chief executive of Boeing's civilian aircraft division, claimed Monday that its upcoming revamped 777 isn't that much heavier and that has other advantages.

"We'll be able to carry the same number of passengers, but we'll be able to fly a lot farther" because of a wing re-design and improved engines, he told reporters. "The A350-1000 will be a generation behind on engine technology."

Smaller planes dominated the last air show in Paris and also had a good showing Monday morning. Lufthansa confirmed its March deal for 100 planes in the smaller Airbus A320 family, Airbus said in a statement. And International Lease Finance Corporation made a firm order for 50 short-haul A320neo jets. At list prices, those deals together would be worth about $15 billion. Los Angeles-based ILFC is Airbus' biggest customer.