China's manufacturing weakened again in June amid a credit crunch and slower U.S. and European orders, two surveys showed Monday, adding to signs that growth in the world's second-largest economy is decelerating. HSBC's purchasing managers' index declined to 48.2 from May's 49.2 on a 50-point scale on which numbers below 50 show a contraction. 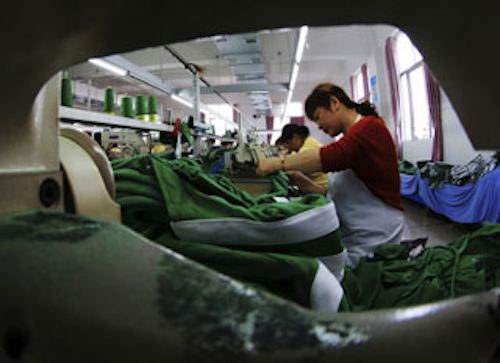 BEIJING (AP) -- China's manufacturing weakened again in June amid a credit crunch and slower U.S. and European orders, two surveys showed, adding to signs that growth in the world's second-largest economy is decelerating.

HSBC's purchasing managers' index declined to 48.2 from May's 49.2 on a 50-point scale on which numbers below 50 show a contraction. A separate measure by an industry group, the China Federation of Logistics and Purchasing, showed activity declined to 50.1 from May's 50.8.

The slowdown in Chinese manufacturing could have global repercussions, depressing demand for iron ore and other commodities from Australia and Brazil and for industrial components from Southeast Asia, Taiwan and South Korea.

Manufacturers were hurt by falling orders and a shortage of credit in June as Chinese regulators try to cool a lending boom they worry could race out of control. A shortage of cash in financial markets caused interest rates paid by banks for loans from other banks to spike to a record high.

"As Beijing refrains from using stimulus, the ongoing growth slowdown is likely to continue in the coming months," said HSBC Corp. economist Hongbin Qu in a statement.

New export orders suffered their sharpest decline in nine months, and manufacturers shed jobs at their fastest rate in 10 months, according to HSBC. Its measure is based on a survey of 420 manufacturing companies.

"The June PMI declined, mostly in the main index, indicating the economy in the future will face downward pressure," said economist Zhang Liqun in a statement issued by the federation.

China's economic growth decelerated to 7.7 percent in the first quarter from 7.9 percent the previous quarter. Forecasters have said the clampdown on bank lending could cause growth to dip below 7 percent in coming quarters. That would be China's weakest performance since the early 1990s.

Beijing is in the midst of a marathon campaign to build up self-sustaining economic growth based on domestic consumption instead of investment and exports.

Chinese President Xi Jinping was quoted by state media on Saturday as saying officials should not be judged just by increases in economic output, an indication that China's Communist leaders are prepared to tolerate slower growth.

China's vast industry of privately owned small manufacturers could be hit especially hard by credit controls. Regulators want banks to reduce profitable but risky unreported lending, much of which goes to entrepreneurs who cannot qualify for formal loans.