The cut brings the price of the Surface RT with 32 gigabytes of memory to $349 without a cover, which also acts as a keyboard. Including a cover with a touch-sensitive keyboard, the device comes to $449. The Surface has a 10.1-inch screen measured diagonally. 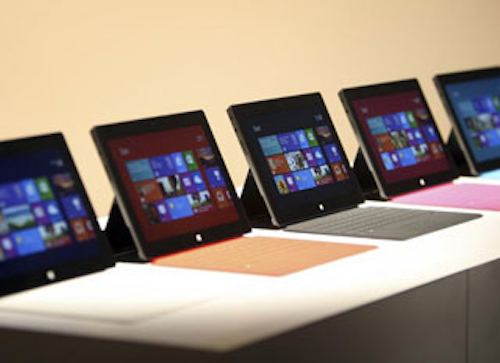 LOS ANGELES (AP) -- Microsoft is slashing the price of its Surface RT tablet by $150 as it fights to increase its tiny share of the booming tablet market.

The cut brings the price of the Surface RT with 32 gigabytes of memory to $349 without a cover, which also acts as a keyboard. Including a cover with a touch-sensitive keyboard, the device comes to $449. The Surface has a 10.1-inch screen measured diagonally.

According to market research firm IDC, Microsoft shipped about 900,000 tablets in the first quarter of 2013. That includes both the slimmed-down RT version and the Pro version of Surface, which is compatible with regular Windows programs.

That gives Microsoft a slim 1.8 percent share of the global tablet market. Apple is the leader with 39.6 percent.