Companies are increasingly confident the economy will grow at a modest pace over the next year and are hiring more, according to a survey of business economists. 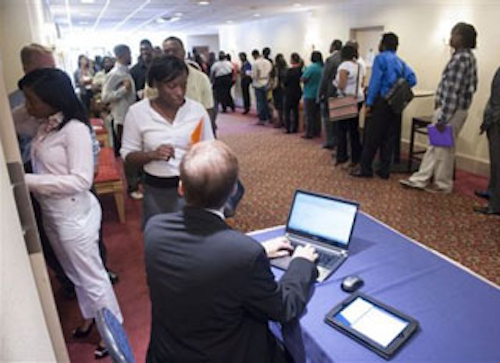 WASHINGTON (AP) -- Companies are increasingly confident the economy will grow at a modest pace over the next year and are hiring more, according to a survey of business economists.

Nearly one-third of the economists surveyed by the National Association for Business Economics said their companies added jobs in the April-June quarter, according to a report released Monday. That's the highest percentage in nearly two years. And 39 percent expect their firms will hire more in the next six months. That's near the two-year high of 40 percent reached in the January-March quarter.

The hiring pickup occurred even though sales and profit growth slowed in the second quarter.

Optimism about future economic growth increased. Nearly three-quarters of the survey respondents forecast growth of 2.1 percent or more over the next 12 months. That's up from two-thirds in the first quarter survey, released in April, and the most in a year.

The quarterly survey's results echo much of the recent data tracking the economy. Growth has been slow in the past nine months, but employers have added jobs at a healthy pace. Many economists anticipate that the steady hiring will help accelerate growth in the second half of this year.

The NABE surveyed 65 of its member economists between June 18 and July 2. The economists work for companies from a variety of industries, including manufacturing, transportation and utilities, finance, retail and other services.

— Profit growth also slowed: Only 21 percent of respondents said profit margins increased last quarter, down from 29 percent in the first.

— Only 19 percent of economists said their firms were raising wages and salaries, down from 31 percent in April and the lowest proportion since October.

— A small but increasing minority of respondents say that government spending cuts and tax increases have hurt their businesses. Twenty-six percent of the economists said their firms were negatively impacted, up from only 16 percent in April. Still, 74 percent said the government policies had no impact on their businesses, though that's down from 79 percent three months earlier.

Looking ahead, companies are increasingly concerned about higher interest rates. That reflects the jump in rates that took place following Federal Reserve Chairman Ben Bernanke's comments in late May that the Fed could slow its bond-buying program later this year. Those purchases are intended to keep interest rates low.

The interest rate on the 10-year Treasury bond, a benchmark that influences mortgage rates and other borrowing costs, has increased nearly a full percentage point to about 2.5 percent since May.

When asked for their biggest concern over the next 12 months, 17 percent of the respondents cited rising interest rates. That is a big jump from April, when only 4 percent cited such concerns.

The biggest concern for most companies is the health of the global economy, which was cited by nearly one-third of the respondents. Europe's financial crisis has plunged that region into a recession, and growth in China, Brazil and other large emerging markets has also slowed. That's crimping U.S. exports.