China's government has ordered companies to close factories in 19 industries where overproduction has led to price-cutting wars, affirming its determination to push ahead with a painful economic restructuring despite slowing growth. 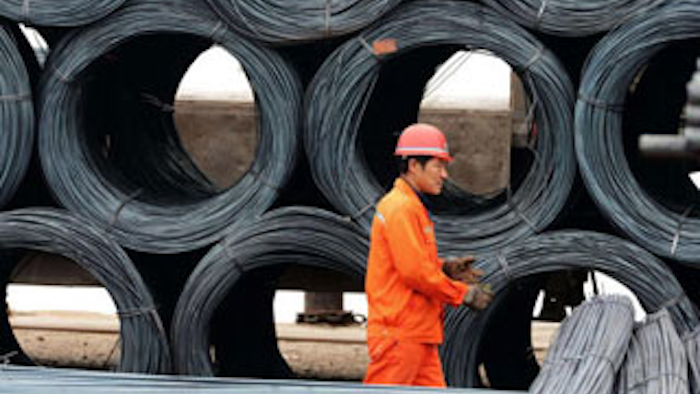 BEIJING (AP) -- China's government has ordered companies to close factories in 19 industries where overproduction has led to price-cutting wars, affirming its determination to push ahead with a painful economic restructuring despite slowing growth.

The industry ministry issued orders late Thursday to more than 1,400 companies to cut excess capacity that has led to financial trouble for manufacturers. The affected industries include steel, cement, copper and glass. It requires some companies to close outright.

Communist leaders are trying to reduce reliance on investment and trade. But a slowdown that pushed China's economic growth to a two-decade low of 7.5 percent in the latest quarter prompted suggestions they might have to reverse course and stimulate the economy with more investment to reduce the threat of job losses and unrest.

"This detailed list shows the government is serious in its efforts to restructure the economy and is prepared to tolerate the necessary pain," said Nomura economist Zhiwei Zhang in a report. "This reinforces our view that aggressive policy stimulus is unlikely in 2012 and that growth should trend down."

An investment boom and government subsidies to industries such as solar panel manufacturing prompted producers to expand rapidly until supply exceeded demand. Companies have been forced to slash prices, often to below production cost.

The government's overall measure of prices charged by producers has fallen for the past 16 months, threatening a growing number with financial ruin. A major solar panel maker, Suntech, was forced into bankruptcy this year.

Forecasters have repeatedly trimmed their growth outlook for China amid a drumbeat of data showing weakening growth in retail sales, factory output and other economic segments.

This month, the International Monetary Fund last week cut its 2013 forecast to 7.8 percent from an 8.1 percent outlook announced just three months earlier. The Fund's chief economist, Olivier Blanchard, said China was the country at the greatest risk of a "large decrease in growth."

The country's top economic official, Premier Li Keqiang, was quoted Tuesday by Chinese newspapers affirming the Communist Party's growth target of 7.5 percent this year. He said the "bottom line" for growth was 7 percent, prompting hopes among investors for at least a limited stimulus.

Also Tuesday, the Cabinet announced a tax cut for small businesses, indicating Beijing is trying to target specific parts of the economy without a costly, across-the-board stimulus.

Thursday's order by the Ministry of Industry and Information Technology said it aims to eliminate "backward production capacity," indicating it also is meant to improve efficiency in energy and resource use.

The production glut is in part a lingering cost of the multibillion-dollar stimulus that helped China rebound quickly from the 2008 global crisis.

Beijing pumped money into the economy with a wave of spending, much of it financed by state banks, on building new subways, bridges and other public works. Higher revenues for state-owned construction companies and suppliers of steel and other building materials propped up inefficient producers and encouraged some to expand.

China To Spend $275B On Pollution