New Zealand authorities have triggered a global recall of up to 1,000 tons of dairy products across seven countries after dairy giant Fonterra announced tests had turned up a type of bacteria that could cause botulism. 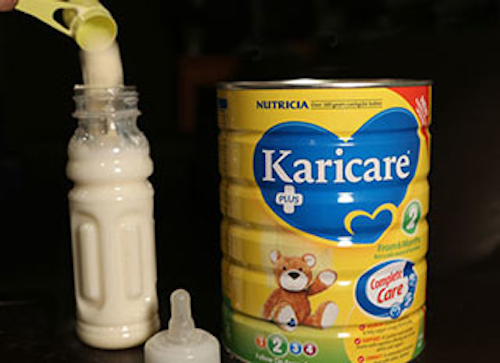 WELLINGTON, New Zealand (AP) -- New Zealand authorities have triggered a global recall of up to 1,000 tons of dairy products across seven countries after dairy giant Fonterra announced tests had turned up a type of bacteria that could cause botulism.

Fonterra said its customers were urgently checking their supply chains.

One New Zealand company has locked down five batches of infant formula and China is asking importers to immediately recall products.

Fonterra is the world's fourth-largest dairy company, with annual revenues of about $16 billion.

The news comes as a blow to New Zealand's dairy industry, which powers the country's economy. New Zealand exports about 95 percent of its milk.

Consumers in China and elsewhere are willing to pay a big premium for New Zealand infant formula because the country has a clean and healthy reputation. Chinese consumers have a special interest after tainted local milk formula killed six babies in 2008.

The Centers for Disease Control describes botulism as a rare but sometimes fatal paralytic illness caused by a nerve toxin.

Fonterra said it has told eight of its customers of the problem, which dates back more than a year, and they were investigating whether any of the affected product is in their supply chains. Fonterra said those companies will initiate any consumer product recalls.

At a news conference Saturday, Fonterra repeatedly refused to divulge the companies, countries or specific products affected. Gary Romano, the managing director of Fonterra's New Zealand milk products, said his company supplies raw materials to the eight companies and it is up to them to inform their consumers of what products might be tainted.

The company did acknowledge its chief executive, Theo Spierings, planned to fly to China Saturday, in part to deal with the fallout from the botulism scare.

New Zealand's Ministry for Primary Industries said Saturday that New Zealand company Nutricia had used some of the tainted product in its Karicare line of formula for infants aged over 6 months. Nutricia had locked down all five batches of infant formula it believed contained the tainted product, the ministry said. But it advised that parents should buy different Nutricia products or alternative brands until it verified the location of all tainted Nutricia products.

The General Administration of Quality Supervision, Inspection and Quarantine also told quality agencies around China to step up inspections of milk products from New Zealand.

Romano said the problem was caused by unsterilized pipes at a Waikato factory. He said three batches of whey protein weighing about 42 tons were tainted in May 2012, adding that Fonterra has since cleaned the pipes.

The New Zealand ministry says the tainted product has been mixed with other ingredients to form about 1,000 tons of consumer products worldwide.

The company said in a release it identified a potential quality problem in March when a product tested positive for the bacteria Clostridium. Many strains of the bacteria are harmless, the company said, and product samples were put through intensive testing over the following months. It said that on July 31 it discovered the presence of a strain of the bacteria that can cause botulism.

Romano said Fonterra hasn't received reports of anybody getting sick and added that the problem hasn't affected any fresh milk, yoghurt, cheese or long-lasting heat-treated milk.

New Zealand's Ministry for Primary Industries said it was working with the company to investigate.

Spierings, the chief executive, said in the release that food safety was the company's top priority.

"We are acting quickly," he said. "Our focus is to get information out about potentially affected product as fast as possible so that it can be taken off supermarket shelves and, where it has already been purchased, can be returned."

Earlier this year, Fonterra announced it had discovered trace amounts of the agricultural chemical dicyandiamide in some of its products, prompting a ban on the chemical's use on New Zealand farms.

Rabobank's 2012 Global Dairy Top 20 report ranked Fonterra as the world's fourth-largest dairy company by revenue behind Nestlé, Danone and Lactalis. The company is a cooperative, partially owned by thousands of farmers.

In 2011 the company collected 15.4 billion liters (4.1 billion gallons) of milk in New Zealand, representing about 90 percent of the country's total.

In 2008, six babies in China died and another 300,000 were sickened by infant formula that was tainted with melamine, an industrial chemical added to watered-down milk to fool tests for protein levels. Fonterra at the time owned a minority stake in Sanlu, the now-bankrupt Chinese company at the center of the scandal.