The U.S. electrical grid is better managed and more flexible a decade after its largest blackout but remains vulnerable to increasingly extreme weather, cybersecurity threats, and stress caused by shifts in where and how power is produced. 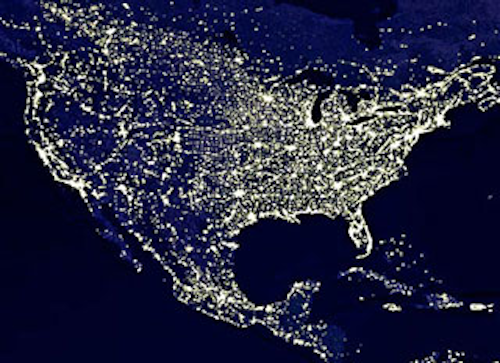 WASHINGTON (AP) -- The U.S. electrical grid is better managed and more flexible a decade after its largest blackout but remains vulnerable to increasingly extreme weather, cybersecurity threats, and stress caused by shifts in where and how power is produced.

Many worry the grid isn't fully prepared for the new and emerging challenges, even though an analysis conducted for The Associated Press shows maintenance spending has steadily increased since North America's largest blackout.

"This job of reliability is kind of impossible, in the sense that there's just so many things that could happen that it's hard to be sure that you're covering all the bases," said William Booth, a senior electricity adviser with the U.S. Energy Information Administration.

The industry has mostly addressed the failures blamed on a tree branch in Ohio that touched a power line and set off outages that cascaded across eight states and parts of Canada during the afternoon of Aug. 14, 2003, darkening computer screens, halting commuter trains, and cutting lights and air conditioners for 50 million people. Grid operators who didn't initially realize what was happening now have a nearly real-time view of the system and are better equipped to stop problems from growing. Utilities share more information and systematically trim trees near high-voltage power lines.

Electricity customers have been giving the grid a bit of breathing room. Power demand has remained flat or even fallen in recent years as lighting, devices, appliances, homes and businesses have gotten more efficient and economic growth has been sluggish. All that reduces stress on the grid.

At the same time, aging coal and nuclear plants are shutting down in the face of higher maintenance costs, pollution restrictions and competition from cheap natural gas. Renewable generation such as wind turbines and solar panels is being installed, adding power that's difficult to plan for and manage.

Temperatures and storms are getting more extreme, according to federal data, and that increases stress on the grid by creating spikes in demand or knocking out lines or power plants. Some regulators and policymakers are increasingly worried about cyberattacks that could target systems that manage power plants or grids.

"The grid that exists today wasn't designed for what everybody wants to do with it," says Joe Welch, CEO of ITC Holdings Corp., the largest independent transmission company in the U.S.

The electric power industry did respond directly to the issues that sparked the blackout. An analysis of spending on maintenance and transmission equipment by more than 200 utilities nationwide conducted for the AP by Ventyx, a software and data services firm that works with electric utilities, shows that spending rose sharply in the years after the blackout.

Maintenance spending for overhead lines increased an average of 8.2 percent per year from 2003 to 2012. In the period before the blackout, from 1994 to 2003, that spending grew 3 percent on average per year.

Spending on transmission equipment also increased. From 2003 to 2012, utilities spent an average of $21,514 per year on devices and station equipment per mile of transmission line. From 1994 to 2003, spending averaged $7,185 per year.

The number of miles of transmission line remained roughly the same, suggesting new money was mostly spent on equipment to make the existing system stronger and more responsive, according to Ventyx analyst Chris Tornow.

Those higher transmission costs have trickled down to customer bills, but they've been largely offset by lower electricity prices, thanks to cheap natural gas. Since 2003, average residential power prices have risen an average of 0.85 percent per year, adjusted for inflation, according to the Energy Information Administration.

The grid's reliability is high, according to a May report from the North American Electric Reliability Corp., which sets standards and tracks the performance of the power plants and high-voltage transmission lines that make up the bulk power system. Last year was particularly good. Not including extreme weather events, major transmission lines caused power losses only twice in 2012, after averaging nine instances annually from 2008 to 2011.

The report says transmission lines have been functioning normally and available for use an average of 99.6 percent of the time, not including for planned outages, since tracking began three years ago.

Most outages residents experience stem not from the bulk system, but from smaller failures in distribution systems managed by local utilities and regulated by states. Not including storm-related outages, the average U.S. customer goes without power 1.2 times annually for a total of 112 minutes, according to PA Consulting Group.

The bulk power system is changing, a result of the declining use of coal and nuclear power and the rising use of natural gas and renewable power.

One-sixth of the existing coal capacity is projected to close by 2020, much of it at small, inefficient units in the Ohio River Valley, the Mid-Atlantic and the Southeast, according to the Energy Information Administration. The permanent closure of four nuclear reactors in California, Florida and Wisconsin was announced this year, and reactors in New York, Vermont and elsewhere may also close.

Plant shutdowns mean there's less of a cushion in electrical capacity when power demand is high or problems arise. Shutdowns also create pockets of transmission congestion or regions where power is scarce. Both situations drive up power prices for customers, make the grid less stable and present planning challenges.

"That is a new stress that we hadn't thought about" a decade ago, said Scott Moore, vice president of transmission engineering and project services at American Electric Power, one of the nation's biggest utilities.

The reliability report raises concerns about the Texas grid, one of the three major U.S. grids, where the amount of wiggle room in capacity is expected to dip below targeted minimum levels.

For example, utilities that supply natural gas to customers for heat can typically take all the gas they need from pipelines before any excess goes to electricity generators. In regions with limited pipeline capacity, such as the Northeast, planners say there might not be enough gas to heat homes and generate electricity simultaneously during a cold snap.

"In the winter there could be a significant and sudden unavailability of power," said former Vermont regulator Rich Sedano, who directs the Regulatory Assistance Project, a nonprofit advisory group. "It's critical that this emerging threat to the grid is addressed."

ITC Holdings' Joe Welch argues increased spending on the grid in recent years reflects how quickly it is aging, not a concerted effort to modernize or strengthen it.

But planners say changes made since 2003 at least give grid operators better control and add flexibility.

"We can't redirect hurricanes or prevent every cyberattack, but we can focus on resilience," said Terry Boston, president of PJM Interconnection, a regional transmission organization serving 13 states.

For now, there appears to be enough electricity capacity to meet demand, which has remained relatively flat since 2005. The nation's natural gas plants aren't fully used, and wind, solar and other renewable generation have been built to comply with state renewable power mandates.

"Many feel there is a very long fuse here, and there may not be a bomb at the end of it," Sedano said.