The U.N.'s chief climate diplomat on Monday urged the coal industry to diversify toward cleaner energy sources and leave most of the world's remaining coal reserves in the ground. 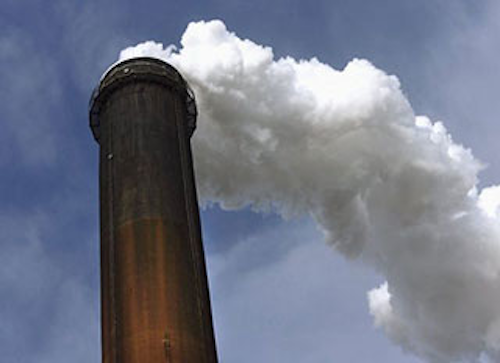 WARSAW, Poland (AP) -- The U.N.'s chief climate diplomat on Monday urged the coal industry to diversify toward cleaner energy sources and leave most of the world's remaining coal reserves in the ground.

On the sidelines of a U.N. climate conference, Christiana Figueres told dozens of CEOs of coal companies meeting at Poland's Economy Ministry that their industry needs to change radically to curb emissions of heat-trapping gases that scientists say are warming the planet.

"The world is rising to meet the climate challenge and as risks of inaction mount, and it is in your best interest to make coal part of the solution," Figueres said.

The coal event was seen as a provocation by climate activists, who used a crane to reach the ministry's roof, where they unfurled banners criticizing Poland's — and the world's — reliance on coal and other fossil fuels.

Police used another crane to take them down, as panelists at the coal summit said that the people in the room, not the people on the roof, have the possibility to change the coal industry.

The World Coal Association, which organized the event, said it was meant as a contribution, not an alternative, to the U.N. climate talks.

Poland generates some 90 percent of its electricity from coal and Economy Minister Janusz Piechocinski said coal must be a part of talks on reducing CO2 emissions.

"You cannot have a low-emissions energy transformation without talking about coal," because it's the second-biggest energy source in the world," he said.

Coal accounts for less than 30 percent of the world's energy supply but more than 40 percent of energy emissions, according to the International Energy Agency.

Figueres, who was criticized by some climate activists for attending the conference, noted coal's role in economic development since the industrial revolution but said it's come at "an unacceptably high cost to human and environmental health."

She said aging, high-polluting coal plants must be closed and new plants should implement technologies that allow for emissions to be trapped before they are released into the atmosphere. But to bring down CO2 emissions to levels that would avoid dangerous levels of warming, most of the existing coal reserves must be left in the ground, she said.

"Some major oil, gas and energy technology companies are already investing in renewables, and I urge those of you who have not yet started to join them," Figueres said.

While coal emissions have declined in the U.S. they are growing fast in China and India to meet the energy needs of their fast-growing economies.

Coal industry officials say significant emissions reductions can be achieved by improving the efficiency of coal-fired plants. But in the long term analysts say expensive carbon-capture technologies need to be implemented to make the deep cuts required to slow climate change.

Boeing Reaches Out To Utah About 777x Production