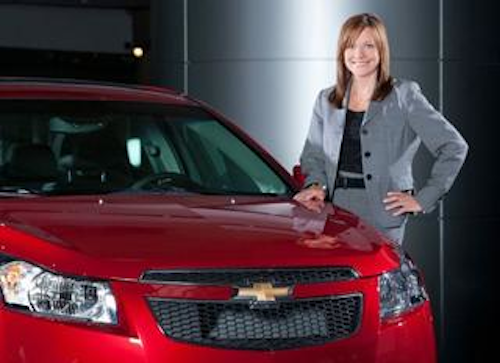 Barra, 51, will replace Dan Akerson on Jan. 15. Akerson, chairman and CEO, moved up his retirement plans by several months because his wife, Karin, is battling advanced cancer, the company said in a statement Tuesday.

With the decision, the GM board separated the board chairman and CEO positions. Barra will get a seat on the board, but Director Theodore (Tim) Solso will succeed Akerson as chairman. Solso formerly was chairman and CEO of engine maker Cummins Inc., and has been on GM's board since June of 2012.

"I will leave with great satisfaction in what we have accomplished, great optimism over what is ahead and great pride that we are restoring General Motors as America's standard bearer in the global auto industry," Akerson said Tuesday morning in a message to employees.

Barra currently holds what many say is the most important job in the company — senior vice president for global product development. She's in charge of design, engineering and quality of all of GM's vehicles across the globe and has shepherded most of the company's recent new vehicle introductions.

Under her command, GM rolled out brawny new full-size pickup trucks, the Chevrolet Silverado and GMC Sierra, and the Chevrolet Impala full-size car, which earned the highest score for a sedan in testing by Consumer Reports magazine. Its quality scores also rose in surveys conducted by J.D. Power and Associates.

She started with GM as an electrical engineering co-op student in 1980 when she attended what is now Kettering University in nearby Flint. She also served as a plant manager and executive director of engineering. She holds a master's degree in business administration from Stanford University.

Ammann, 41, was named GM president and will manage its regional operations worldwide. He'll also head up the global Cadillac and Chevrolet brands, as well as GM Financial, the company's auto loan arm.

Shares of GM fell 8 cents, or 0.2 percent, to $40.82 in Tuesday morning trading after the announcement.