Surrounded by an array of gadgets and high tech equipment, President Barack Obama pledged to boost American manufacturing and to give entrepreneurs greater access to production tools that would help bring their ideas to fruition. 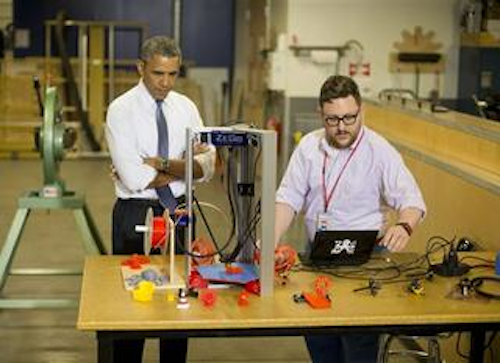 PITTSBURGH (AP) -- Surrounded by an array of gadgets and high tech equipment, President Barack Obama pledged to boost American manufacturing and to give entrepreneurs greater access to production tools that would help bring their ideas to fruition.

Obama visited this venerable steel manufacturing city to showcase a workshop chain called TechShop, a variation on a tool lending library that provides high-end instruments to hobbyists, tinkerers and start-up businesses to help them realize their innovations. The tour was designed to draw attention to Obama's own plan to make more government technology and assets available to the private sector.

"I can't rent the space shuttle out to you," he joked. "But there are areas where we can in fact enhance what is already being done by companies like TechShop."

To maintain the U.S. edge in innovation, Obama said, "we've got to have basic research, we've got to have skills like math and science and engineering that that are developed, we also have to provide platforms for people who have these ideas to go out there and actually make stuff."

From Pittsburgh, Obama was flying to New York City for a gala lesbian, gay, bisexual and transgender fundraiser for the Democratic National Committee. The fundraiser comes a day after the White House announced plans for Obama to sign an executive order prohibiting federal contractors from discriminating against employees on the basis of their sexual orientation or gender identity.

The trip combines important election-year tasks for Obama — maintaining a focus on the economy, raising money and nurturing an important Democratic voting and donor bloc.

The Pittsburgh visit is part of Obama's renewed emphasis on how to create jobs and improve wages. During the next several weeks Obama is looking to cut through the current foreign policy flare-ups with an emphasis on working families, manufacturing, wages and the need for greater spending on infrastructure projects.

That attention could be crucial in an election year when some Democrats in vulnerable races are not embracing other top Obama issues like climate change and health care.

Also Tuesday, the White House announced that the administration was giving entrepreneurs easier access to high-tech equipment at more than 700 research and development facilities, such as NASA's National Center for Advanced Manufacturing in New Orleans and the Energy Department's Manufacturing Demonstration Facility at Oak Ridge National Laboratory in Tennessee. In addition, five federal agencies will spend more than $150 million in research to support the Material Genome Initiative, a government and private-sector partnership designed to speed up the development of innovative materials.

Obama touted technological advances that are putting production tools in the hands of anybody who has a good idea. He showed off his own iPad case that was made by DODOcase, a company that made its first prototype of the product at a TechShop in California.

"Cost of a gym membership, you have access to all this equipment," Obama said as he marveled at the output of the shop.

The administration is paying special attention to manufacturing, a current bright spot in the economy. A White House report released Tuesday said manufacturing output had increased 30 percent since the recession ended, growing at a pace nearly twice that of the overall economy.

In New York, Obama will attend three big-dollar fundraisers, with the gay community gala as the centerpiece. Obama will also headline his first super PAC fundraiser as the main draw for the Senate Majority PAC, a Democratic group that takes unlimited donations. Obama's appearance will cap what has been a gradual acceptance of the big-money groups he once decried.

Obama will conclude the night at a fundraising dinner at the home of the Vogue editor, Anna Wintour.

The president is likely to get a rousing reception at the gala in response to his decision to act on workplace discrimination, even if it is limited to the federal contracting workforce.

Obama lacks authority to extend that protection to all Americans, but the order being drafted by the White House would affect about 14 million workers whose employers or states currently do not prohibit workplace discrimination against gay, lesbian, bisexual and transgender individuals. The scope of the measure was tabulated by the Williams Institute at UCLA Law School, which studies sexual orientation and gender identity law and public policy.

Obama had resisted signing the order in hopes Congress would pass a broader non-discrimination measure that would apply to nearly all employers. While the Democratic-controlled Senate passed the legislation last year, the measure has languished in the Republican-led House and there is little sign that lawmakers will take it up in an election year.

4 Months Into Recall, Only 7 Pct. Of GM Cars Fixed