Ford's new aluminum-sided F-150 will be a lot lighter and more efficient when it goes on sale later this year. But for now it's a serious drag on profits. 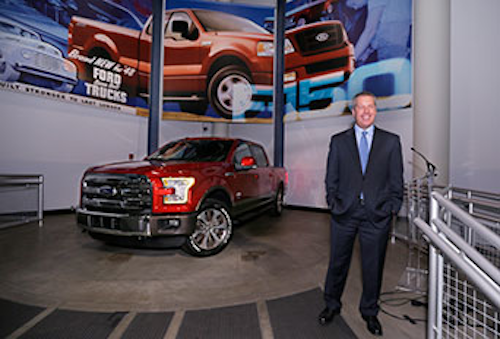 DEARBORN, Mich. (AP) — Ford's new aluminum-sided F-150 will be a lot lighter and more efficient when it goes on sale later this year. But for now it's a serious drag on profits.

Ford's net income dropped 34 percent to $835 million in the third quarter, largely due to the cost of launching the pickup. The new F-150, which is 700 pounds lighter due to its aluminum construction, is scheduled to go on sale by the end of this year.

The company closed its Dearborn truck plant for five weeks during the quarter to change over to new equipment, contributing to $700 million in negative operating cash flow. Chief Financial Officer Bob Shanks said it was the first quarter the company has been cash flow negative since 2010.

Ford also cut back on truck sales in order to preserve inventories while it readies the new truck. That hurt pretax profits in North America, which fell 39 percent to $1.4 billion. Sales in the region dropped 8 percent.

Despite the bad news, Ford beat Wall Street's expectations for the July-September period. The company earned 21 cents per share, down from 31 cents in the same period a year ago. Without one-time items, including $160 million for separation payments in Europe, Ford earned 24 cents. That beat Wall Street's expectation of 19 cents, according to analysts polled by FactSet.

Ford shares were up 5 cents to $14.45 in premarket trading about 90 minutes ahead of the market open.

Ford has repeatedly warned investors that this year would be difficult. It's launching a record 23 vehicles worldwide, including the new Mustang sports car that went on sale during the third quarter. It's also building five plants in Asia and launching the luxury Lincoln brand in China.

Sales and revenue were up overall in Europe, but weakness in Russia and Turkey and lower pricing contributed to a big decline. Ford's losses in the region more than doubled to $439 million. Ford is due to close its Genk plant in Belgium by the end of this year, which will help align production to European demand.

In South America, Ford tumbled to a loss of $170 million, down from a $160 million profit a year ago. Sales dropped by 21 percent.

Sales were up 5 percent in Asia, and Ford reported its highest ever market share of 4.7 percent in China. But investment in the new plants and products caused pretax profits to drop 62 percent to $44 million.