All that's needed now to save Rosie the Riveter's old plant in Michigan is a signature or two. 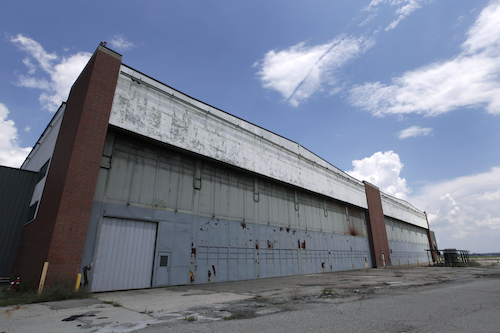 DETROIT (AP) — All that's needed now to save Rosie the Riveter's old plant in Michigan is a signature or two.
Yankee Air Museum chairman Ray Hunter will sign papers Thursday making the aviation museum the official owner of a 144,000-square-foot slice of the former Willow Run Bomber Plant, where Rose Will Monroe and other workers built B-24 Liberator bombers during World War II.
The signing ceremony represents the culmination of efforts to raise the $8 million needed to save part of the factory for use as the Yankee Air Museum's new home.
"Once the document is signed, the building is truly saved," said Michael Montgomery, a consultant on the fundraising effort.
Hunter, Montgomery and others associated with the Save the Willow Run Bomber Plant campaign want to convert the factory into the new home of the nearby Yankee Air Museum and dedicate it to aviation and all the other Rosies who toiled at similar U.S. plants to aid the war effort.
Following the signing event, a number of Rosies will unveil the name and logo of the new museum.
"If we're telling the Arsenal of Democracy and Rosie story, this is the place to do it," said Montgomery, who added that the group's fundraising efforts are not yet done.
He said $5 million more is needed to "fill out the interior of the building" — to create the exhibits and infrastructure necessary to transform the edifice into a museum.
The facility in Ypsilanti Township, west of Detroit, is owned by the Revitalizing Auto Communities Environmental Response Trust, which took control of sites around the country left behind in General Motors' bankruptcy.
RACER Trust is overseeing the ongoing demolition of the massive plant. The section being purchased Thursday would have been razed if Yankee Air Museum hadn't stepped in.
The Willow Run factory, which was built by Ford Motor Co. and featured a mile-long assembly line, churned out one B-24 every hour and nearly 9,000 in all.
It transitioned to producing cars after the war ended and continued making them and parts for more than a half-century under the General Motors name before closing for good four years ago.