Starting with founding the company in 1916 and culminating with delivery of the 787 Dreamliner, the free app depicts advances that have transformed the world . . . 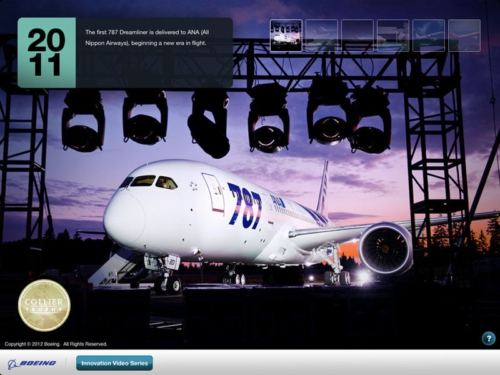 CHICAGO, May 7, 2012 /PRNewswire/ -- Boeing (NYSE: BA) announced today the launch of its first official app for iPad, 'Milestones in Innovation', now available on the App Store. The app brings nine decades of aviation innovation to iPad through beautiful imagery and an interactive timeline.

"This is the history of Boeing as a digital coffee table book," said Fritz Johnston, Boeing's vice president of brand and advertising. "iPad's amazing Retina display makes it the perfect canvas to present this visually stunning narrative."

Starting with Bill Boeing founding the company in 1916 and culminating with first delivery of the 787 Dreamliner, the free app depicts advances that have transformed the world and made Boeing one of the most respected companies. The app also includes four videos from Boeing's "Inspiration to Innovation" series (www.boeing.com/stories). In addition, Boeing recently began distributing stories, photos, and videos through Flipboard, Apple's 2010 App of the Year. To follow Boeing on Flipboard users can search for and select "BoeingStories" from that app's content guide, which is accessible via the red ribbon at the top of the screen.

Boeing is the world's leading aerospace company and the largest manufacturer of commercial jetliners and military aircraft.  It has customers in 150 countries and employs more than 170,000 people across the United States and in 70 countries.

The Boeing 'Milestones in Innovation' App is available for free from the App Store on iPad or at www.itunes.com/appstore.