This suggests the economy has entered a more self-sustaining phase of the recovery with stronger job creation. 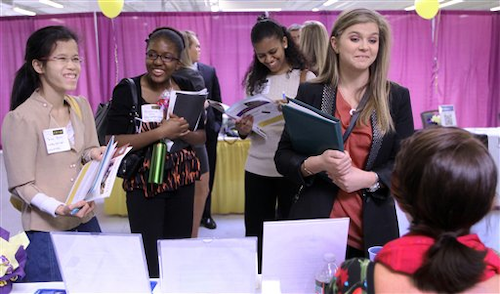 The four-week average, a less volatile measure, fell to 361,750, also the lowest in four years. The average has dropped nearly 13 percent in the past six months.

When unemployment benefit applications drop consistently below 375,000, it usually signals that hiring is strong enough to lower the unemployment rate.

The downward trend in applications is a promising sign ahead of Friday's report on March job growth. Employers added an average of 245,000 jobs per month from December through February. And the unemployment rate has fallen from 9.1 percent in August to 8.3 percent in February, the lowest in three years.

Economists forecast that employers added 210,000 jobs last month, although they expect the unemployment rate was unchanged for the second straight month.

"We believe that the economy has entered a more self-sustaining phase of the recovery with stronger job creation," said John Ryding, an analyst at RDQ Economics, in a note to clients.

Hiring is picking up as the economy is showing signs of steady growth. Consumer spending jumped in February by the most in seven months, the government said last week.

That's boosting retailers, restaurants, hotels and other service firms. The service sector expanded at a healthy pace in March, according to a private survey released Wednesday. The Institute for Supply Management, a trade group of purchasing managers, said that its survey found that a measure of employment rose to nearly a six-year high.

A separate survey by the ISM of manufacturing companies found that they also stepped up hiring last month, and boosted production.

The number of people receiving benefits fell to 7.1 million in the week ended March 17, the latest data available. That's about 100,000 fewer than the previous week. The figure includes about 3.3 million people receiving extended benefits under federal programs put in place during the recession.

Companies are investing more, boosting factory output. Businesses ordered more machinery, equipment and other capital goods in February, according to a government report this week.

And some companies are still letting workers go. Yahoo said Wednesday that it is cutting 2,000 jobs, or 14 percent of its work force. It is the Internet company's sixth mass layoff in the past four years.