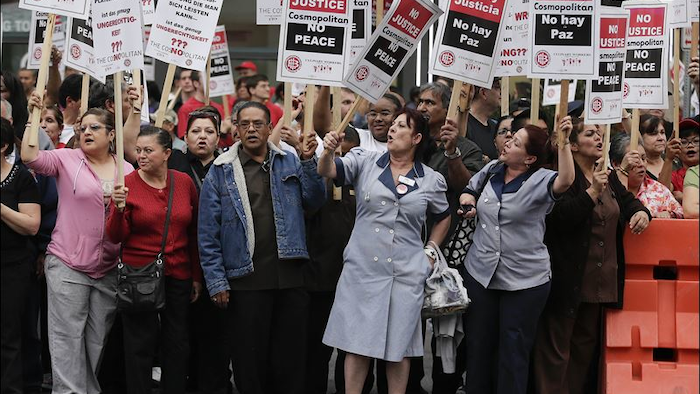 Their targets include a policy adopted late last year by the National Labor Relations Board that would close the gap between a petition for a union election and the start of voting, as well as an NLRB standard that holds corporations accountable for labor infractions at franchise locations.

"The first thing we’ll do is try to overrule the ambush election rule," said Lamar Alexander, R-Tennessee and the chairman of the Senate's labor committee. "We’re going to do everything we can to stop this."

Alexander argued eliminating the waiting period between the petition and voting could enable union organizers to gather support for their efforts before management or workers could properly vet the proposal.

The NRLB adopted the rule in December -- after a previous effort was struck down in federal court -- and it's set to take effect in April. Senate Republicans have indicated they'll invoke the Congressional Review Act, allowing members to reject select federal regulations without the threat of a filibuster.

Democrats countered the union election rule would prevent management "stall tactics," with labor committee ranking Democrat Patty Murray of Washington alleging Republicans are "more interested in putting the profits of the biggest corporations ahead of the rights and opportunities of middle-class workers."

House Republicans, meanwhile, appear set to take similar steps to thwart the election rule, with House Speaker John Boehner, R-Ohio, alleging the NLRB under the Obama administration "has pursued a culture of union favoritism that is detrimental to America’s workers and job creators."

NLRB Chairman Mark Peace, for his part, defended the ruling, arguing “both businesses and workers deserve a process that is effective, fair and free of unnecessary delays.”

Although Democrats would not be able to filibuster the move on the Senate side, passage by both houses would almost certainly see a veto from the president.

The election change was one of several NLRB initiatives that irritated Republicans in recent months. Another December decision established that employees could use their employer's email system for communications about wages, working conditions and union organizing during "nonworking time."

Alexander has also indicated that Senate Republicans could target the NLRB's joint employer standard, which states that violations of labor laws by individual franchise owners are also the responsibility of the corporation at large. The Tennessee senator predicted the policy would "destroy" the franchise model and instead lead to "many more company-owned outposts."

Business groups, meanwhile, have vocally opposed the union election rule, with two lawsuits challenging the NLRB filed last month. The first came from a coalition including the U.S. Chamber of Commerce, the National Association of Manufacturers, the National Retail Federation and the Society for Human Resource Management; the second came from Texas chapters of the Associated Builders and Contractors and the National Federation of Independent Business.