The rival group to the United Auto Workers union at the Volkswagen plant in Tennessee brands itself as local, independent and free of outside influence or political agenda. 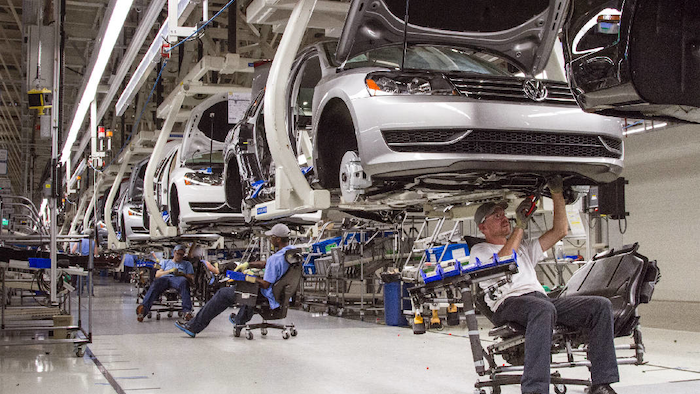 Nashville, Tennessee — The rival group to the United Auto Workers union at the Volkswagen plant in Tennessee brands itself as local, independent and free of outside influence or political agenda.

But the American Council of Employees won't divulge how it is funded, and the lawyer who recently filed the group's overdue disclosures with the U.S. Department of Labor touts his expertise in "union avoidance."

ACE has 381 members among both hourly and salaried workers at the Chattanooga factory, according to the filing. By contrast, the UAW said last month it had 816 members among the hourly workers alone. That's about 55 percent of the blue-collar workforce.

ACE wants to prevent the UAW from gaining bargaining rights for the first time at a foreign-owned automaker in the South, and its leaders previously spearheaded the successful effort, dubbed Southern Momentum, that helped thwart the UAW in a union election at the factory last year.

The UAW blamed the narrow loss on "outside interference" by Republican politicians like U.S. Sen. Bob Corker and anti-union groups like Grover Norquist's Americans for Tax Reform, which the union said worked in concert with Southern Momentum.

ACE's filing with the Labor Department says the Chattanooga law firm of Evans Harrison Hackett PLLC represents it. The firm's partners include Maury Nicely, who was a chief spokesman for the Southern Momentum effort, and Philip Byrum, who corresponded with federal officials when ACE missed filing deadlines on its finances and membership.

Byrum's bio on the law firm's website says he has taught seminars on harassment, disability law, the Family and Medical Leave Act and "union avoidance."

Nicely said he doesn't see a mixed message between helping to establish ACE at Volkswagen and helping other companies avoid unionization efforts.

"This sounds almost silly, but ACE is a nonunion union," Nicely said in a phone interview. "One thing to make very clear is that ACE has never had the goal or objective of becoming the exclusive bargaining representative for employees at Volkswagen."

Nicely said the group formed to keep the UAW from being the only group seeking to represent workers' interests at the plant after the union vote.

Mike Cantrell, the president of UAW Local 42, criticized the group for not disclosing its sources of income, other than listing about $15,000 in "other receipts." Local 42 derives all of its funding from the national UAW. Neither the UAW local nor ACE collects dues from members.

"Southern Momentum never disclosed its source of funding and, now, neither has its sister organization," Cantrell said in an email. "Folks can debate ideas all day long, but the one thing we should all agree on is transparency."

Nicely said ACE gathers voluntary contributions from members and from the community but declined to elaborate other than to say that no money flows to the group from billionaire conservative activists the Koch brothers.

The call for transparency is "just an attempt by the UAW to intimidate anybody who supports this group," he said.

Volkswagen's hands-off approach to organizing at the plant stands in contrast to most other foreign automakers in the South. That's in part because of the influence of labor representatives who control half of the votes on the board of the world's No. 2 auto producer. They have chafed at the U.S. plant standing alone among the company's worldwide plants without formal labor representation.

The company wants to create a German-style works council to decide plant-specific issues like working conditions, scheduling and safety at the plant. But U.S. law says the company can't create a works council without the participation of an independent union.

Volkswagen has created an internal labor policy for the plant that stops short of granting collective bargaining rights. The UAW has qualified for the highest tier of participation; ACE has been certified at the bottom tier.