The bill expands California's existing equal pay law and goes further than federal law by placing the burden on the employer to prove a man's higher pay is based on factors other than gender. 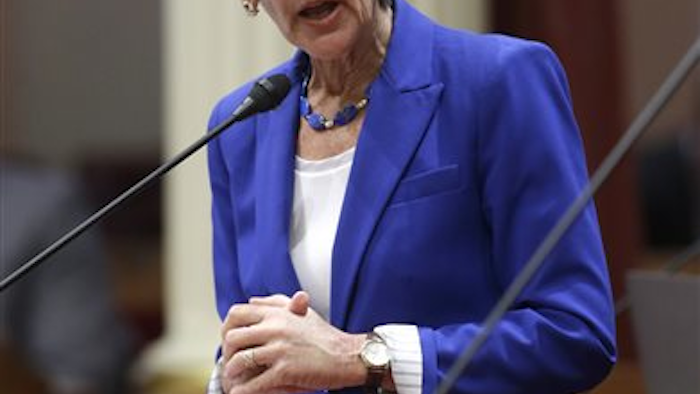 SACRAMENTO, Calif. (AP) — Female workers in California will get new tools to challenge gender-based wage gaps under legislation signed into law Tuesday that supporters say offers the strongest equal-pay protection in the nation.

Democratic Gov. Jerry Brown signed the measure while surrounded by women and girls at an event at Rosie the Riveter National Historical Park in Richmond, northeast of San Francisco.

"The stratification and the pay disparities in California and in America, probably in the world, are something that really eats away at our whole society," Brown said. He called the legislation a "milestone."

The bill by Sen. Hannah-Beth Jackson, a Santa Barbara Democrat, expands California's existing equal pay law and goes further than federal law by placing the burden on the employer to prove a man's higher pay is based on factors other than gender.

It also protects workers from discrimination and retaliation if they ask questions about how much other people earn, though it doesn't require that employers provide that information. Workers also will gain the right to sue if they are paid less than someone with a different job title who does "substantially similar" work.

The Fair Pay Act stipulates employers can justify higher wages for men only if the pay is based on seniority, a merit system, quantity or quality of production or any other "bona fide factor other than sex." It cleared the Legislature with bipartisan support and backing from the state Chamber of Commerce.

Senate Minority Leader Jean Fuller, R-Bakersfield, said the legislation strikes a balance between the interests of employers and women in the workforce.

Some state lawmakers say they were motivated to pursue equal pay legislation by heartfelt pleas from high-profile Hollywood actresses at this year's Academy Awards. Lawyer Ellen Pao also made national waves when she filed a gender discrimination lawsuit against a prestigious venture capital firm in Silicon Valley.

While she lost, the publicity prompted embarrassed soul-searching in an industry dominated by male managers.

"By closing loopholes in California's equal pay law and expanding protections against retaliation, the Fair Pay Act will encourage more women to ask questions and demand fair compensation," she said in a statement.

Brown said the bill by Assemblywoman Lorena Gonzalez, D-San Diego, relied on a misunderstanding of the evidence-based rules used to calculate compensation, and would replace that system with an "ill-defined and unscientific standard."

Gonzalez said the veto made her more committed to addressing what she called a loophole in state law.

"A woman's breasts are worth as much as the prostate of a male co-worker, and they should be valued as such if they were lost in a workplace injury," she said.

The governor also signed first-in-the-nation legislation to address privacy concerns for smart TVs that come equipped with voice recognition features. The new law will require manufacturers to block a television's recording device unless consumers are prominently informed during initial setup that the feature could record conversations. It also forbids using or selling stored conversations.

And after vetoing several bills that would have restricted the use of drones in California, Brown signed a bill Tuesday intended to block paparazzi from using drones by changing the definition of a physical invasion of property to include airspace above someone's land to capture recordings.

Brown also is considering a bill that aims to end the cycle of women's wages lagging behind men's pay by barring employers from using previous salary information as justification for paying women less than their male co-workers.