Even with gas prices hovering around $2 per gallon, Washington state lawmakers are considering a raft of bills to encourage more drivers to turn to electric cars in the name of reducing pollution. 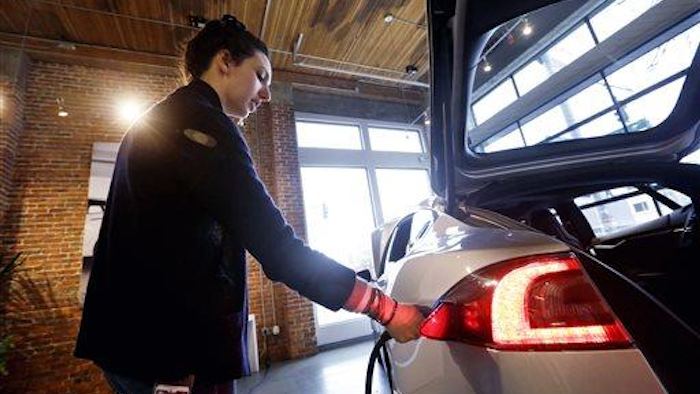 Even with gas prices hovering around $2 per gallon, Washington state lawmakers are considering a raft of bills to encourage more drivers to turn to electric cars in the name of reducing pollution.

Plug-in-and-charge automobiles are gaining popularity in the state. Washington records show there were nearly 12,000 registered electric cars by the end of last year.

But with the state's 450 car charging stations mostly clustered around the Puget Sound region — there are none along Interstate 90 east of Cle Elum — Gov. Jay Inslee and some members of the House and Senate are pushing new laws that would make driving electric cars more convenient, albeit somewhat more expensive to buy and own.

State Sen. Mark Mullet, D-Issaquah, told the Senate Transportation committee Wednesday afternoon the electric-car market hasn't yet matured to the point at which most drivers of gas-burning cars can find a high-range, low-cost car to switch to. Demand, with an assist from the state, could fix that, with benefits for the environment, he said.

"This is exciting new technology," said Mullet, who is sponsoring an electric-car bill. "If you find a way to promote this technology, you will reduce carbon emissions in the state of Washington without having to resort to a tax."

Bills in the House and Senate as part of Inslee's anti-pollution agenda would create a statewide electric vehicle infrastructure bank to fund new charging stations, using money set aside from state coffers.

Since electric car drivers don't pay gas taxes, money to build the charging stations and pay electric-car drivers' share of road maintenance would come from a $100 annual fee for electric-car registration, along with a change to the cars' sales tax exemption, which is set to expire July 1.

A new bill would renew the sales tax exemption until 2021 for only the first $45,000 of an electric car's purchase price. That would cover the full cost of most electric cars sold by major automakers, such as the Nissan Leaf and Ford Focus Electric. But buyers would have to pay sales tax on part of the cost of high-end cars like the Tesla Model S.

Transportation chairman Sen. Curtis King, R-Yakima, said the electric-car proposals deserve close study, but added that he doesn't want to favor them in a way that shuts out benefits from other emerging ways to power cars, such as fuel cells.

"All of us want to do the best we can for our environment," King said, "and this is one way we might be able to help."

Also under consideration are bills to implement Inslee's plan to require cities in King, Pierce, Snohomish and Thurston counties to allow charging stations in nearly all land zoning categories, including residential, and to create incentive programs to reward builders for adding car-charging stations to their projects.

A separate bill, sponsored largely by members of the mostly Republican Senate majority coalition, would include new electric-vehicle chargers as items that earn credits toward utilities' compliance with a conservation initiative voters approved in 2006.