Toyota's new hydrogen-powered car already costs far less than analysts' original forecasts, but reports suggest the Japanese automaker hopes to make it affordable to most car buyers in the next five to seven years. 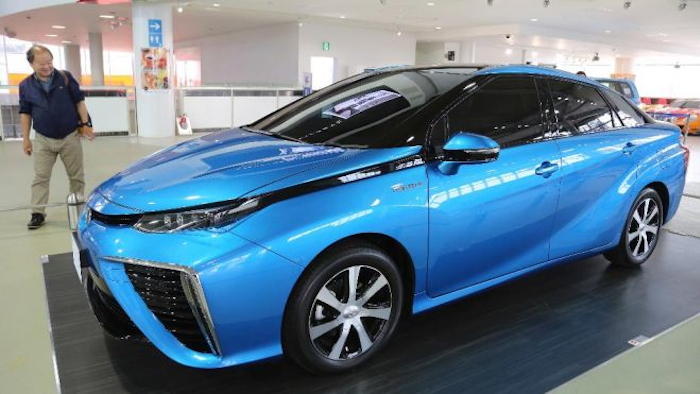 Toyota's new hydrogen-powered car already costs far less than analysts' original forecasts, but reports suggest the Japanese automaker hopes to make it affordable to most car buyers in the next five to seven years.

The company expects the 2016 Toyota Mirai to debut in the U.S. later this year with a $57,500 price tag, besting previous forecasts of more than $60,000 and approaching half of the project's initial estimates that neared $100,000.

Katsuhiko Hirose, who heads Toyota's fuel cell program, indicated he'd eventually like to make the Mirai competitive with diesel vehicles. Hirose predicted the price would fall along the same trajectory as hybrid cars, which took 10 to 15 years to approach affordability for the general public. Toyota officials hope to reach that goal in half the time.

The Mirai uses hydrogen gas to generate electricity and leaves water vapor at its only exhaust. Toyota officials said the car can travel 300 miles between fuel-ups and would take less than five minutes to recharge.

Tesla founder Elon Musk harshly criticized fuel cells and suggested hydrogen would be an inefficient source of energy. Critics also pointed out that the sprawling U.S. has few hydrogen fueling stations outside of California, in contrast to heightened investment in the technology in Japan.

Others, however, suggested overlooking the company that made the Prius a household name would be a mistake.