Toyota is building two new auto plants, one in Mexico and the other in China, ending a 3-year hiatus from such ambitions that the Japanese automaker voluntarily imposed on itself after massive recalls. 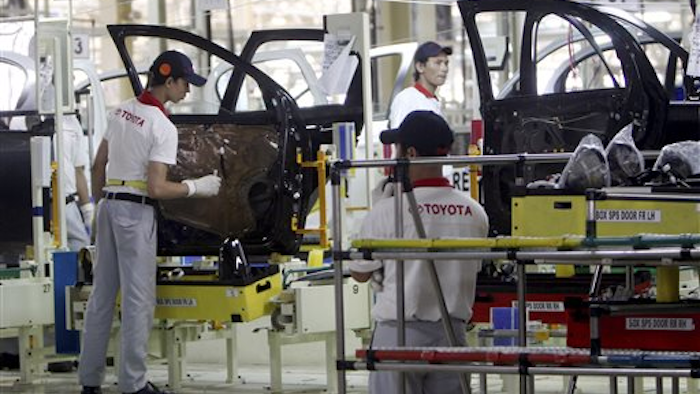 Tokyo, Japan — Toyota is building two new auto plants, one in Mexico and the other in China, ending a 3-year hiatus from such ambitions that the Japanese automaker voluntarily imposed on itself after massive recalls.

Toyota Motor Corp. announced Wednesday it will invest $1 billion in the plant in Guanajuato, Mexico, creating 2,000 jobs, to make the Corolla subcompact — one of Toyota's biggest hits.

Production is to start in 2019, with annual output estimated at 200,000 vehicles. That will consolidate Corolla production for North America in that plant and Toyota's plant in Blue Springs, Mississippi.

Corolla production will end at its Ontario, Canada, plant, which will instead focus on more expensive mid-size vehicles, Toyota said, without giving specifics. The plant now produces Lexus models, the RAV4 sport-utility vehicle and the Matrix hatchback, in addition to the Corolla.

Separately, Toyota is adding a third assembly line next to its plant in Guangzhou, China, investing 52.5 billion yen ($440 million). The line is to be completed by 2017, for a model it declined to disclose.

Annual production capacity will go up by 100,000 vehicles. The new line won't create new jobs because the existing two lines will become more efficient, reducing the number of workers needed, according to Toyota.

A Toyota executive, briefing reporters in Tokyo over a video connection from Nagoya in central Japan, said Mexico and China were chosen because they are two markets where auto demand is expected to rise in coming years.

Toyota has been working on a strategy for growth called Toyota New Global Architecture, or TNGA, based on a more widespread sharing among models of platforms, or the basic parts on which cars are built, as well as other components.

The "architecture" is based on a leaner, smarter approach to production, to become as competitive and as fail-proof as possible in quality. The first cars under the system are to roll out later this year.

Acknowledging the company had grown too fast, Toyota President Akio Toyoda put on hold for the past three years any plans for new plants after the recall fiasco which began in 2009.

More than 10 million Toyota vehicles were recalled around the world for faulty brakes, sticky gas pedals, ill-fitting floor mats and a range of other defects.

Toyota is still embroiled, along with other automakers, in a recall involving air bags made by Takata Corp. of Japan which can deploy and rupture with enough force to cause injury or death.

It has been eager to put the recall woes behind it, but Toyoda has repeatedly stressed future growth must be "sustainable" and ensure quality.

"An increase in production does not mean an undisciplined pursuit of more," he said in a statement Wednesday.