FDA Unaware of Listeria in Blue Bell Plant Before Outbreak

Federal health officials say they were never told of repeated findings of listeria at a Blue Bell Creameries facility before an outbreak linked to the ice cream turned deadly. 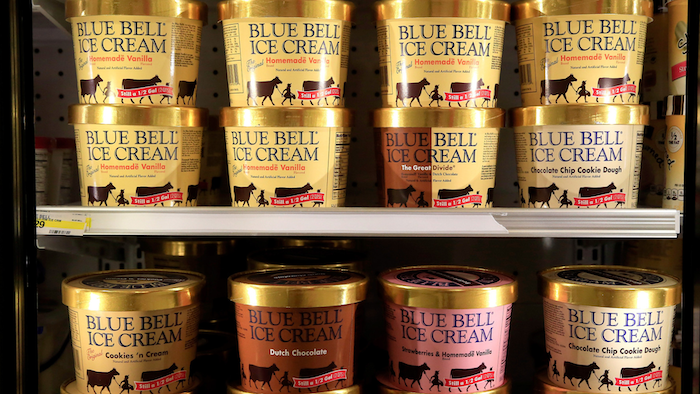 Washington, D.C. — Federal health officials say they were never told of repeated findings of listeria at a Blue Bell Creameries facility before an outbreak linked to the ice cream turned deadly.

The outbreak — and the FDA's lack of knowledge of the bacteria found in the plant — is a stark illustration of gaps in the nation's food safety system. Food contamination often isn't discovered until people get sick or die.

In the outbreak linked to Blue Bell, three people died in a Kansas hospital and seven others were sickened in Kansas, Texas, Oklahoma and Arizona.

The FDA said it isn't uncommon for companies not to report findings of listeria or other pathogens. Companies are only required to report to the FDA if they find a "reasonable probability" that a food could make people sick. Blue Bell's listeria samples were found on surfaces and not in the ice cream, and the company hadn't tested to see if the listeria strains found were among those that are the most dangerous.

The FDA said it is common for a company to take corrective action — sanitizing and cleaning — without doing further testing if the pathogen isn't found in the food itself.

"Although Blue Bell's testing did identify listeria, the company did not further identify the strain to determine if it was pathogenic," FDA spokeswoman Lauren Sucher said.

The company eventually recalled all of its products after tests showed listeria in its ice cream last month.

A sweeping food safety law passed by Congress in 2010 sought to prevent such ongoing contamination by requiring companies to do more testing, put detailed food safety plans in place and take more preventive measures to keep pathogens, especially deadly bacteria like listeria, from getting into food.

But that law has been plagued by delays within the Obama administration. The FDA has struggled to get the rules right and appease many of the farmers and companies that will have to abide by it. After lawsuits over the delays, the final version of those rules must come out later this year.

Since President Barack Obama signed the food safety bill into law, there have been dozens of outbreaks, including one of listeria in cantaloupe in 2011 that killed 30.

"It certainly has taken far too long to get this done and these outbreaks are the result," said Christopher Waldrop, director of the Food Policy Institute at the Consumer Federation of America.

The Blue Bell outbreak is an example of how contamination can go unnoticed and untreated. The FDA hadn't inspected the Oklahoma plant since March 2012, and even if it had been in the plant more recently, the company may not have been required to tell the agency about the contamination. Many company records are private, though the food safety law would make some of those tests more visible. The only way some records become available "is if people get sick," said David Plunkett of the Center for Science in the Public Interest.

State health inspections weren't much help: A March 2015 state inspection of the Oklahoma plant read "No Violations Observed!" and "Keep it up!"

FDA inspectors found many violations at that plant, including dirty equipment, inadequate food storage, food being held at improper temperatures and employees not washing hands appropriately. Employees wore dirty shoes in the plant and soiled, porous wood pallets were used for ingredient storage and transportation. The FDA also said the company did not do enough testing for possible food contamination.

Blue Bell said in a statement Thursday that its facilities remain closed indefinitely as it cleans and sanitizes them. Of the FDA report, company spokesman Joe Robertson said when a test was conducted and there was a positive result for listeria, "our standard procedure is to stop, clean and sanitize and then re-swab the area. When we get a negative test (result), we feel like we are good about operating again."

Robertson added, "In hindsight, we can see now that wasn't always adequate."

Listeria illness generally only affects the elderly, people with compromised immune systems, and pregnant women and their newborn infants. All three who died in the Blue Bell outbreak had already been hospitalized for other conditions.