A year after Japan eased a longstanding ban on military exports, barely a trickle of deals has formed for its powerhouse manufacturers who are reckoning with latecomer status in a crowded global industry. 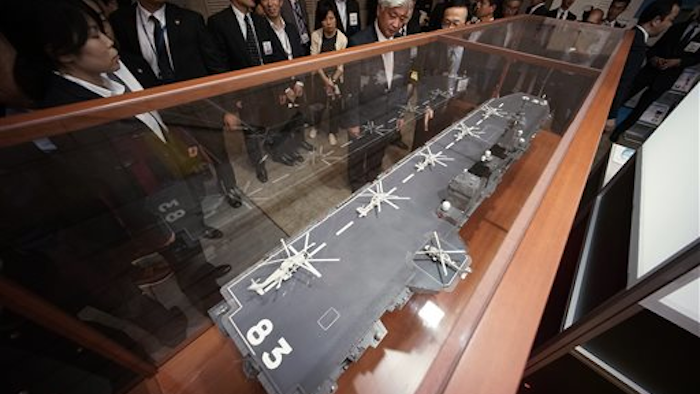 Tokyo, Japan — A year after Japan eased a longstanding ban on military exports, barely a trickle of deals has formed for its powerhouse manufacturers who are reckoning with latecomer status in a crowded global industry.

Industrial giants such as Kawasaki Heavy Industries seem poised for a windfall from an industry that worldwide has more than $400 billion in annual sales but ambitions are hitting a wall. So far, the only known deals in the pipeline are the possible sale of Soryu-class submarine technology to Australia and ShinMaywa Industries' US-2 amphibious aircraft for India.

After decades of near isolation from the global defense industry, "Japan is not up to speed with global trends," said Toru Hotchi, director of the Defense Ministry's Equipment Policy Division and Japan's go-to person for procurement.

"Japan can make anything, in principle, except for nuclear weapons," Hotchi said in an interview. "The potential is high."

Japan's home market is only worth about 1.5 trillion yen ($12.5 billion) annually. Big-ticket sales overseas could enable its defense contractors to scale up, increasing profits and slashing costs for the Ministry of Defense as it stretches its budget to upgrade outdated hardware and beef up defenses against China.

The MAST, or Maritime Systems and Technology, exhibition opened Wednesday in Yokohama, showcasing Japanese and foreign military products, including aircraft, weapons and associated naval and aerospace technology — anything that can be used in maritime security and surveillance, as well as disasters and rescue operations. Giant foreign contractors like Lockheed Martin and Babcock and military officials from "friendly" nations are there, too.

Japanese manufacturers exhibited at last year's MAST expo in Istanbul, Turkey, but will have a much larger presence in Yokohama, said Warren Edge of the Paris-based exhibition organizer.

"From our exhibitors' perspective, yes, it's a big market and we are looking forward to doing this for Japan," Edge said.

Defense exports have gotten a slow start, partly because Japan lacks the marketing and technology transfer expertise of the U.S. and other major exporting countries.

"Those skills will have to be built, and they're going to have to build them while they are competing with their ally the U.S. in a defense export market," said Jack Midgely, an executive officer at Deloitte Tohmatsu Consulting Co. in Tokyo and an expert on the defense industry.

In the U.S., military-related exports are mostly conducted through the Foreign Military Sales program under the Defense Security Cooperation Agency.

The system provides the products, financing, training and logistical support to foreign militaries, which is backup Japan is ill-equipped to offer. To address that issue, Japan plans to set up an agency to oversee defense equipment research and development, and procurement, to cut costs and improve efficiency.

Hotchi said Japan is best off focusing on disaster relief and reconnaissance, areas unlikely to raise the hackles of neighbors still resentful over past wartime aggression. It also can expand cooperation with the U.S., Australia and other developed nations in joint production, logistics and other support for advanced military technology, he said.

"The U.S. sets the global defense equipment standard," Hotchi said. "Equipment that is not used by the U.S. is not going to be a viable business."

Hotchi acknowledges that his hardest sell is in Japan.

"Japanese companies are not really prepared to compete," he said. "They don't know how, because their customer up to now was 100 percent the Defense Ministry, and they've never had to make any marketing effort."

Still, some progress is evident.

Japan should focus on areas such as its diesel submarine propulsion technology, which is unique and advanced, Hotchi said.

Another star product is ShinMaywa's US-2 amphibious aircraft, which is on India's shopping list. The company, based in western Japan's Hyogo prefecture, refused comment on those negotiations, citing sensitive timing.

Hotchi and others say Japan can also take over production of equipment and parts no longer made in the U.S. For example, last year Tokyo approved plans to make seeker gyros used in the PAC-2 missile defense system.

Japan's participation in the U.S.'s F-35 Lightning joint strike fighter jet program, as a customer and as a supplier of regional maintenance and logistics support, may promote sales of its own components for the jet, Midgely said. It's no guarantee, though: the other 11 countries participating are also competing for contracts.

Mark Burgess, customer business director for Honeywell Aerospace in the Asia-Pacific region, said the participation of Mitsubishi Heavy Industries and other Japanese suppliers in the Boeing's Dreamliner 787 and 777X projects shows they are an affordable option for outsourcing aerospace manufacturing.

Makers of Formula 1 race cars, used to meeting the same exacting specifications as for aircraft, could find new opportunities in making parts, supplying logistics and other segments of the larger market.

Another promising area is 3-D printing, where parts are very sophisticated and tolerances of error are minuscule.

"This isn't going to open a multibillion dollar industry overnight, but I think there's going to be some tangible benefits," Burgess said.