Toyota Promises to Help Find Cause of Takata Airbag Defects

Toyota President Akio Toyoda vowed to help get to the bottom of the problems with Takata air bags, the recalls for which have ballooned to about 53 million vehicles worldwide, stressing that regaining consumer trust is an industry-wide concern. 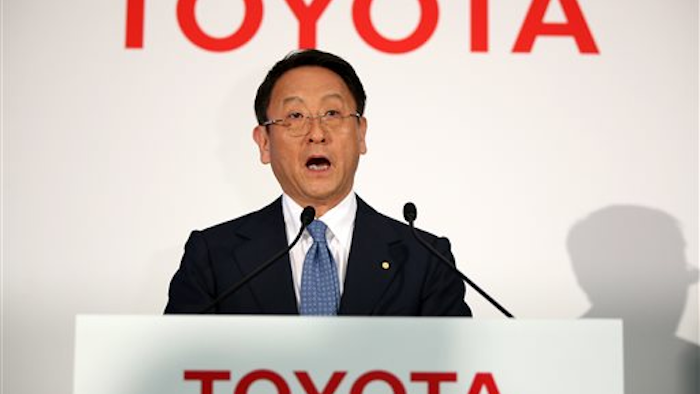 Tokyo, Japan — Toyota President Akio Toyoda vowed to help get to the bottom of the problems with Takata air bags, the recalls for which have ballooned to about 53 million vehicles worldwide, stressing that regaining consumer trust is an industry-wide concern.

Doubts are growing about whether Japanese supplier Takata Corp. has the financial muscle to deal with all the defects, a task that could take years. The ultimate size of its financial burden will remain unclear until the underlying cause of the problems is identified.

Toyoda was solemn when addressing Takata's woes. He pointed out Toyota Motor Corp. had gone through a similar public-relations disaster over massive recalls that began in 2009, and expanded to some 14 million vehicles worldwide, for problems including faulty floor mats, defective brakes and sticky gas pedals.

"Recalls are not just about technical problems. If there is a morsel of consumer doubt, then we have to deal with it," he told reporters on the sidelines of a reception Thursday for the Japanese Automobile Manufacturers Association.

"We must aggressively pursue recalls. Otherwise, we can't go forward," he said.

The air bag inflators being recalled can kick in with too much force, blow apart a metal canister and send shards flying. The defect has caused at least six deaths and more than 100 injuries worldwide.

Toyota has been working with the other automakers affected by the Takata defect, including Japanese rivals such as Honda Motor Co., the hardest hit, and manufacturers such as BMW AG, Fiat Chrysler Automobiles N.V., Ford Motor Co. and General Motors Co. to pinpoint the root of the air bag problem.

Toyota and nine other automakers hired Orbital ATK, an aerospace and defense technology company based in Dulles, Virgina, to conduct testing on Takata air bags.

Takata and U.S. authorities, as well as some automakers on their own, are also carrying out tests.

Although exposure to moisture for extended periods appears to trigger the problem, the root cause is still unknown.

"It's like a sickness. You have to find out what's causing it if you hope to treat it and fix it," Toyoda said.

Analysts say too many factors remain unclear to properly assess the ability of Takata to hold up under the costs of such massive recalls, the biggest on record.

Because the root cause of the problem is unknown, the cost burden on Takata is hard to calculate.

If a total switch of a major air bag component or design is needed, the cost would skyrocket. Takata air bags use a chemical different from other makers to inflate the air bags, ammonium nitrate, which can be unstable.

The situation could, on the other hand, be solved by a relatively cheap adjustment in production methods or replacing a minor part.

For now, the air bags are being replaced with newer ones, because, whatever the cause, the explosions don't appear to happen until the air bags get older. This means the replacement air bags could also turn out to be defective, requiring another replacement, depending on what the tests eventually find.

The Tokyo-based company, which also sells seatbelts, is still making money from its mainstay products, said Shiro Sakamoto, analyst with Daiwa Securities Co. Its operating profit for the fiscal year through March 2015 was better than expected, he said, but costs related to recalls have sent it into the red overall.

Toyota, the world's top automaker in global vehicles sales, had record profit of 2.17 trillion yen ($18 billion) for the fiscal year through March, up 19 percent from the previous year, buoyed by sales growth in the U.S. and a perk from the cheap yen.

Auto officials say the feeling is strong within the Japanese auto industry that they have to stick together to resolve the Takata problems because every player will be affected by any dent in reputation related to safety.

Also, auto suppliers, such as Takata, can't be dumped overnight, even if automakers wanted to. Vehicle models are developed over time, often years, and parts such as air bags are part of the overall design and engineering.

Even so, automakers, including Toyota and Honda, have been lining up other suppliers, whenever they can to replace the air bag inflators. That's partly because Takata can't keep up with making replacement parts.

Takata was fined $14,000 per day by the U.S. National Highway Traffic Safety Administration since Feb. 20, for failing to fully cooperate in the investigation.

That fine ballooned to more than $1.2 million before it was suspended Tuesday after Takata agreed to cooperate. Other civil penalties are still possible, according to NHTSA.

Even if Takata manages to survive the financial battering, it still faces a serious challenge in regaining trust, from consumers, regulators and the companies it has supplied.

When asked, Toyoda said he really didn't know if Takata would be able to win back trust, as Toyota did after its recall scandal.