A woman who died in a Los Angeles-area car crash last September is the eighth person killed by exploding airbags made by Takata Corp. of Japan, U.S. safety regulators and Honda Motor Co. confirmed Friday. 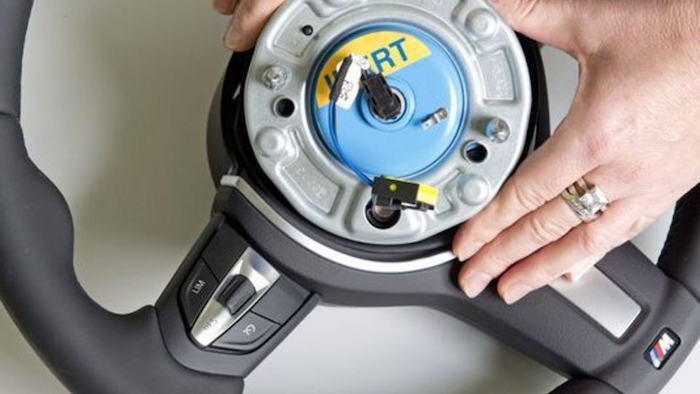 The woman was identified in a lawsuit as Jewel Brangman, 26, who died from neck and head injuries when the driver's airbag in her rented 2001 Honda Civic inflated with too much force and spewed metal shrapnel.

Honda and the National Highway Traffic Safety Administration each said Friday that they had determined the airbag caused her death. She is the seventh victim in the U.S. and eighth worldwide, including a woman in Malaysia.

Brangman rented the 2001 Civic in San Diego and was driving in Los Angeles County when the crash occurred. Honda says the car was recalled in 2009 but not repaired even though the company sent four notices to its owners.

Takata uses ammonium nitrate to create a small explosion and quickly inflate airbags. But the chemical can become unstable when exposed to moisture, burning too fast and blowing apart a metal canister designed to contain the explosion.

In May, Takata bowed to U.S. government pressure and agreed to double the number of airbag inflators it's recalling to 33.8 million, making it the largest automotive recall in U.S. history. The problem, which has persisted for more than a decade, has brought congressional hearings and investigations from NHTSA and the Justice Department.

NHTSA Administrator Mark Rosekind said in a statement that Brangman's death in an unrepaired rental car is more evidence of why his agency wants authority to stop the sale or rental of cars with unrepaired recalls.

The lawsuit alleges that the defective air bag cut Brangman's neck and caused a severe brain injury that ultimately killed her. It also accuses Sunset Rental of renting an unreasonably dangerous car.

Honda and Takata offered condolences to the Brangman family, and Honda urged people whose cars have been recalled due to Takata airbags to get repairs done as soon as possible. The company is offering loaner cars if parts aren't available. A telephone number listed on Sunset's website was disconnected, and an email message was left for the company.

Honda said in a statement that the Civic, with a salvage title, was purchased by the current owners at an auction and rented by Brangman in August of last year. Honda also said it mailed a notice of a passenger air bag recall in June of 2013 to the current owners, but that repair also wasn't made.

Also Friday, General Motors added more than 243,000 Pontiac Vibes, which were designed by Toyota, to the list of cars being recalled for the airbag troubles. The cars, from the U.S. and Canada, are from the 2003 through 2007 model years.