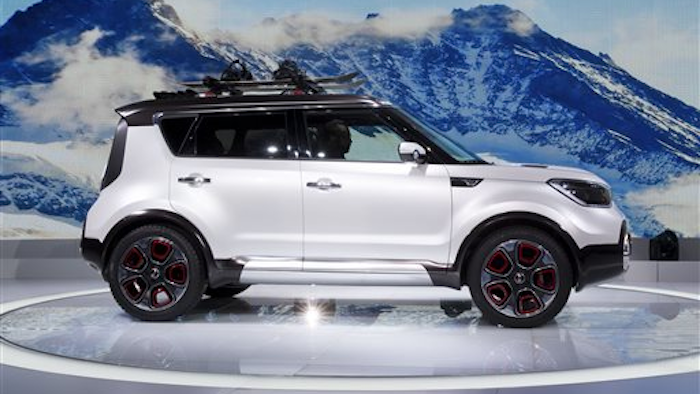 Detroit, Michigan — Sport utility vehicles are unstoppable — and automakers hope to cash in on the boom with some updated models coming to this year's Chicago Auto Show.

Strong demand is likely to continue this year, says Jesse Toprak, president of Toprak Consulting Group. SUV sales may not see double-digit growth, since overall sales are expected to slow as the U.S. market nears a peak of 17 million vehicles. But SUVs should still outpace sales of cars, Toprak says.

Small SUVs like the Honda CR-V have been the fastest growing segment in the market for the last three years. They appeal to both young families and aging Baby Boomers. Low interest rates, easing credit standards and new versions of popular models like the Jeep Cherokee and Subaru Outback have also fueled demand.

Here are some of the SUVs debuting at the Chicago show, which opens to the public Saturday:

— CHEVROLET EQUINOX: General Motors Co. is unveiling a refreshed Chevrolet Equinox small SUV. It's the first update to the Equinox since it went on sale in 2010, and it should help the popular SUV compete with newer rivals until it gets an expected redesign in late 2017.

The 2016 Equinox will have a larger, handsomer, chrome-accented grille and upgraded projector-beam headlamps; on higher trim levels, the headlamps are LEDs. A rear-view camera will be standard on all models. Blind spot detection and cross-traffic alert are new options. Inside, there's a new standard seven-inch screen and an updated instrument panel.

The Equinox has been a consistently strong seller despite its advancing age. Last year, Equinox sales rose 2 percent to 242,242, making it the fourth best seller in the crowded small SUV market behind the Honda CR-V, Ford Escape and Toyota RAV4. The 2016 Equinox goes on sale this fall.

— KIA TRAIL'STER: The Kia Soul meets Jeep with the Trail'ster concept. Kia's design team says this is a "near-future" look at an off-road version of its Soul wagon. It has a fully retractable canvas roof and integrated roof rack fittings with aluminum cross rails.

It sits 2.5 inches higher than a standard Soul, for better off-road performance, and it's fitted with eye-catching Pirelli snow tires. Under the hood is a turbocharged, 1.6-liter, four-cylinder engine with 185 horsepower and an electric all-wheel-drive system that can be switched on when it's needed, which helps improve fuel economy over the regular Soul.

— HONDA PILOT: Honda has ditched the boxy styling of the outgoing Pilot for a more aerodynamic look that mimics its smaller sibling, the popular CR-V. The 2016 Honda Pilot — which goes on sale this summer — has a larger, eight-inch display screen, an improved navigation system and up to five USB ports to power the family's devices.

New amenities include an optional heated steering wheel and heated second-row seats. Under the hood is a new 3.5-liter, direct injected V-6 engine with start-stop technology to save on fuel. Buyers can choose one of two new transmissions, a six-speed or a nine-speed, and front-wheel-drive or all-wheel-drive configurations.

Fuel economy wasn't announced, but increased use of lighter materials has dropped 300 pounds of weight, so the new Pilot should beat the old model's 25 mpg on the highway.

New safety features include LED high beams that automatically dim for oncoming traffic and Honda's first road departure mitigation system — borrowed from Acura — which monitors the vehicle's road position and can correct the steering or brake if it senses an imminent collision.

— ACURA RDX: Just three years after its redesign, the RDX crossover is getting some tweaks for the 2016 model year.

Horsepower is up, from 273 to 279, thanks to a new 3.5-liter V6 engine. The engine's cylinder deactivation system, which can power the SUV on four cylinders in light driving, improves fuel economy by 1 mpg, for up to 29 mpg on the highway.

The front is more sculpted, with a three-dimensional grille and Acura's signature jeweled headlights. There's a host of new safety features, including lane departure warning, adaptive cruise control and a system that uses radar and a camera to detect road hazards, including pedestrians.

The updates should help the RDX compete in a hot market for small luxury SUVs. Acura sold a record 44,865 last year, but sales were flat versus the previous year. By comparison, sales of the BMW X5 jumped 18 percent to more than 47,000.