The latest models of Google's self-driving cars are now cruising the streets near the Internet company's Silicon Valley headquarters as an ambitious project to transform the way people get around shifts into its next phase. 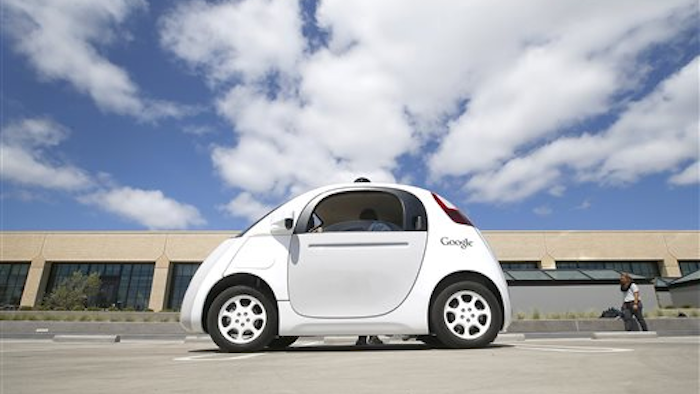 San Francisco, California — The latest models of Google's self-driving cars are now cruising the streets near the Internet company's Silicon Valley headquarters as an ambitious project to transform the way people get around shifts into its next phase.

This marks the first time that the pod-like, two seat vehicles have been allowed on public roads since Google unveiled the next generation of its self-driving fleet more than a year ago. The cars had previously been confined to a private track located on a former Air Force base located about 120 miles southeast of San Francisco.

Google announced last month that it would begin testing the curious-looking cars last month, but hadn't specified the timing until Tuesday when it disclosed the vehicles are driving up to 25 miles per hour on the roads around its Mountain View, California, office.

Google had installed its robotic driving technology in Lexus sports utility vehicles during the first few years of testing before developing the smaller prototype. The new models are designed to work without a steering wheel or brake pedal, although the vehicles will be equipped with those features during the initial runs on public roads.

A human will also ride in the cars to take control in emergencies, just as has been the case with the self-driving Lexus vehicles during the past six years.

The debut of the pod-like car will help Google get a better understanding on how well its technology works around other vehicles steered by people. California's Department of Motor Vehicles have given Google permission to send up to 25 of its latest self-driving cars on neighborhood roads.

If all goes well, Google hopes to gain regulatory clearance to remove the steering wheel, brake pedal and emergency driver from the prototype. Company executives have expressed hope that self-driving cars using its technology will be joining the flow of daily traffic by the end of this decade.

The earlier models of Google's self-driving cars had been involved in 13 minor accidents through more than 1.8 million miles on the roads, according to the company. Google blamed the collisions on other vehicles in every instance except one when the company says one of its own employees was steering.

Motorists who encounter Google's latest self-driving car while they are in Mountain can share their experience with the company at http://www.google.com/selfdrivingcar/contact/ .