French carmaker Renault SA reached a potentially groundbreaking deal with leading unions Wednesday that allows it to reduce its workforce and cut costs in exchange for keeping jobs and production in France. Renault and other European carmakers have been struggling to stay competitive globally as Europe's car market flails. 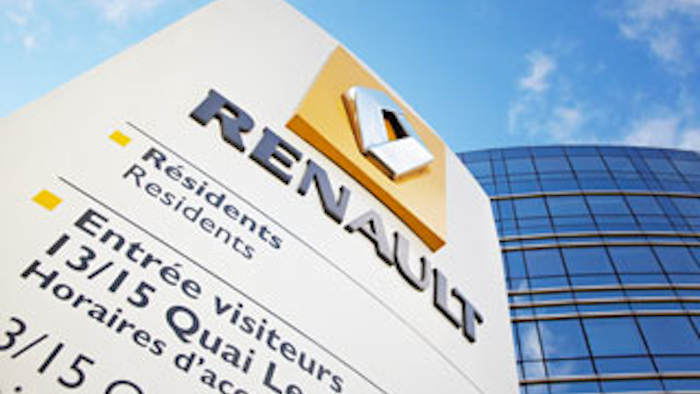 PARIS (AP) — French carmaker Renault SA reached a potentially groundbreaking deal with leading unions Wednesday that allows it to reduce its workforce and cut costs in exchange for keeping jobs and production in France.

Renault and other European carmakers have been struggling to stay competitive globally as Europe's car market flails. Vehicle sales in Europe have been sliding for four years and fell another 7.8 percent in January.

Meanwhile, rigid labor agreements in France drive up wages and benefits and make it difficult to move jobs elsewhere. As car sales have plummeted in Europe, large portions of factories there have remained idle, at great expense to manufacturers.

The Renault deal, which follows a similar one it made with unions in Spain, is aimed at providing management more flexibility in staffing as the market evolves while making better use of its French plants.

The plan will hold wages steady this year, while increasing the average number of hours worked by 6.5 percent over the year. The average weekly working time will be 35 hours for all workers, in line with national law; previously, some employees had only worked 32 hours a week. Renault also plans to reduce its workforce by 7,500 over the next three years — but will not resort to layoffs or buy-outs to do so. It will simply not replace workers who leave voluntarily.

The French government and big companies in similar straits have been closely watching the Renault negotiations, which took nearly nine months. Improving the competitiveness of French companies — and especially French industry — is a major challenge for the government and one it thinks is key to driving down the 10.6 percent unemployment rate.

While France has long struggled with high labor costs, the global economic slowdown has exposed and exacerbated the problem. Many French companies are now in a bind: Either they get beaten by competitors with more room to slash prices because they have lower costs or they also cut prices to compete, hurting the revenues they need to reinvest in the kind of innovation that insulates manufacturers from such price competition.

The government has proposed its own law to loosen labor regulations and is also pushing companies to negotiate better deals with their employees, as Renault has.

The company said in a statement that Chairman Carlos Ghosn signed the deal with representatives of the CFDT, CFE-CGC and FO unions Wednesday. Only the CGT union did not sign.

Renault said the deal would make its French plants more competitive and allow it to move production back to the country. It was that key commitment that gained the government's support of the plan. Renault has promised to make at least 710,000 vehicles per year in France by 2016, compared with the around 530,000 produced last year.

That would bring its factory utilization rate to over 85 percent — well above the European average of 74 percent.