The turnaround expert who represented Chrysler during its successful restructuring is taking on one of the toughest fiscal tasks anywhere in the country: Fixing Detroit. Kevyn Orr, hired Thursday as Detroit's emergency manager, brings expertise from his work at one of the world's largest law firms plus the threat of Chapter 9 bankruptcy, which he says favors cities like Detroit when it comes to erasing debt. 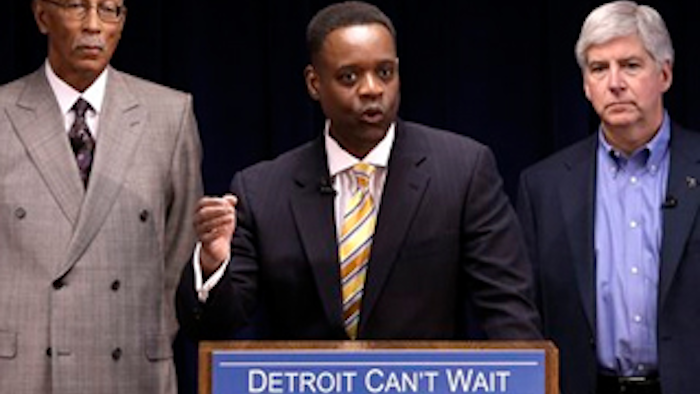 DETROIT (AP) — The turnaround expert who represented Chrysler during its successful restructuring is taking on one of the toughest fiscal tasks anywhere in the country: Fixing Detroit.

Kevyn Orr, hired Thursday as Detroit's emergency manager, brings expertise from his work at one of the world's largest law firms plus the threat of Chapter 9 bankruptcy, which he says favors cities like Detroit when it comes to erasing debt.

"Don't make me go to the bankruptcy court. You won't enjoy it," Orr said Thursday in a possible warning to city unions, vendors and others after being introduced by Gov. Rick Snyder as Detroit's emergency manager.

"Bankruptcy's been my stock and trade. I'm very comfortable in bankruptcy courts," said Orr, who has resigned from the international Jones Day firm ahead of his new appointment. "You can do everything by consent. ... When I say consensual, I mean ... let's get at it and work together because we can resolve this."

His appointment makes Detroit the largest city in the country to fall under state oversight. He starts work March 25 in Detroit.

Detroit is saddled with a $327 million budget deficit and more than $14 billion in long-term debt — a morass that developed slowly during the decline of the auto industry, the exodus of a quarter million people from 2000 to 2010 and outright mismanagement at City Hall.

The city has been making ends meet on a month-to-month basis with the help of bond money held in a state escrow account. The city has also instituted mandatory unpaid days off for many city workers.

Mayor Dave Bing has spent the initial three years of his first term trying to turn the city's fiscal fortunes around. His hands often were tied by an unwieldy city charter, pushback from unions determined to keep victories from earlier contract battles, and a City Council he didn't see eye-to-eye with on many critical financial issues.

Snyder has taken that problem and given it to Orr, along with a $275,000 annual contract and broad powers available only under the state's emergency manager law.

Orr, who represented Chrysler during its successful restructuring, will control all spending, including renegotiating labor contracts, selling off assets and even suspending elected officials' salaries.

"The argument Kevyn made is creditors are in a worse position in a Chapter 9 so that they would be better off negotiating an outcome at the city level," state Treasury Andy Dillon said.

"You meet with all these folks now and you have a consensual arrangement about how we're going to recast the city's balance sheet to go forward. If there's a lot of obstruction and inability to get people to the table, (bankruptcy) becomes an option. But I don't think that it's necessary."

Cleveland-based Jones Day, hired to be the city's restructuring counsel, is regarded as expert in restructuring and insolvency, with and without court supervision, according to James McTevia, president of a Michigan-based firm that specializes in turnaround management.

"I am sure their goal is to keep Detroit out of the bankruptcy court," he said.

Orr told reporters in Detroit on Thursday that he is up to the challenge.

"We can rise from the ashes," he said. "This is a beautiful city and a wonderful state that gave me my start. I feel compelled to do this job."

Under state law, his appointment is to last 18 months. But Orr doesn't expect the turnaround to take nearly that long.

The job "has a fuse on it," he said. "And If I do a good job, I get fired. I am highly motivated. If we work together, we can get this done significantly shorter than 18 months."

When he met with Snyder, Orr said, he called the manager job "an unsung hero task." He asked the governor why he would bother to help the city. Snyder's response was: "Kevyn, it's the right thing to do, and it's the right time to do it."

The new manager called the job "the Olympics of restructuring" and said he relished the challenge, even though it meant up giving up his job with the law firm.

"It's not that I'm altruistic, but if we can do this, I will have participated in one of the greatest turnarounds in the history of this country," Orr said.

A state-appointed review team previously determined that Detroit's cash deficit meant the city would have to either increase revenues or cut spending — or both — by about $15 million per month for three months starting in January to "remain financially viable."

Those troubles, and the struggles of the mayor and the City Council to present a workable turnaround plan, led Snyder to turn to Orr.

"The bottom line here is that we must stop fighting each other," Bing said Thursday. "We must start to work together. I'm happy that now I've got teammates. I've got partners that can help me do things that need to be done in our city."