In her first speech as the head of EPA, Gina McCarthy told an audience gathered at Harvard Law School in Cambridge, Mass., that curbing climate-altering pollution will spark business innovation, grow jobs and strengthen the economy. The message was classic Obama, who has long said that the environment and the economy aren't in conflict and has sold ambitious plans to reduce greenhouse gases as a means to jumpstart a clean energy economy. 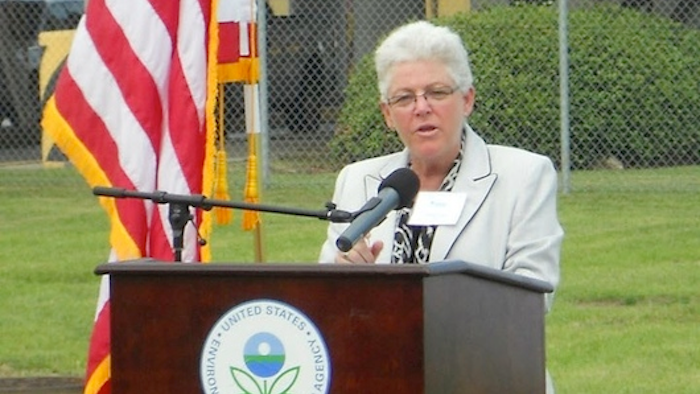 In her first speech as the head of EPA, Gina McCarthy told an audience gathered at Harvard Law School in Cambridge, Mass., that curbing climate-altering pollution will spark business innovation, grow jobs and strengthen the economy. The message was classic Obama, who has long said that the environment and the economy aren't in conflict and has sold ambitious plans to reduce greenhouse gases as a means to jumpstart a clean energy economy.

McCarthy signaled Tuesday that she was ready for the fight, saying that the agency would continue issuing new rules, regardless of claims by Republicans and industry groups that under Obama the EPA has been the most aggressive and overreaching since it was formed more than 40 years ago.

"Can we stop talking about environmental regulations killing jobs? Please, at least for today," said McCarthy, referring to one of the favorite talking points of Republicans and industry groups.

"Let's talk about this as an opportunity of a lifetime, because there are too many lifetimes at stake," she said of efforts to address global warming.

In Obama's first four years, the EPA has issued the first-ever limits on toxic mercury pollution from power plants, regulated greenhouse gases for the first time, and updated a host of air pollution health standards.

McCarthy acknowledged the agency had been the most productive in its history. But she said Tuesday that "we are not just about rules and regulations, we are about getting environmental improvement."

But improvement, she said, could be made "everywhere."

That optimistic vision runs counter to claims by Republican lawmakers and some industry groups that more rules will kill jobs and fossil fuel industries. The EPA under Obama has already put in place or proposed new rules to reduce carbon pollution from cars and trucks, large smokestacks, and new power plants - regulations that McCarthy helped to draft as head of the air pollution office. Next on its agenda is the nation's existing fleet of coal-fired power plants, the largest single source of carbon dioxide left. Obama in a June speech gave the agency until June 2014 to draft those regulations.

"It is not supposed to be easy. It is supposed to be hard," McCarthy said of the road ahead. "I don't think it is my job out of the gate to know what the path forward is. It is my obligation to let those voices be heard and listen to them."

A panel in the Republican-controlled House recently signed off on a plan to cut the agency's budget by a third and attached a series of measures that McCarthy said "do everything but say the EPA can't do anything."

Yet, last week, in a victory, a federal court dismissed challenges brought by Texas and power companies to EPA's plans to regulate the largest sources of heat-trapping gases.

"Climate change will not be resolved overnight," she added. "But it will be engaged over the next three years - that I can promise you."

The test can rapidly detect fragments of virus proteins.
May 11th, 2020
Follow Us
Most Recent