Tennessee has not made economic incentives for Volkswagen contingent on the German automaker rejecting the United Auto Workers union at its Chattanooga assembly plant, Gov. Bill Haslam said Wednesday. A top Democrat in the state House last week alleged that Haslam was trying to use economic incentives to sway Volkswagen against working with the UAW. 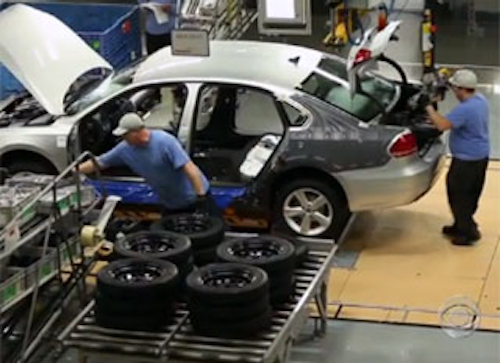 A top Democrat in the state House last week alleged that Haslam was trying to use economic incentives to sway Volkswagen against working with the UAW, which said last week that a majority of workers at the plant had signed cards in support of being represented by the union in a German-style works council.

Asked Wednesday about that claim, the Republican governor responded: "We did not."

"What we have said is, 'What you all do these matters to us,'" he said. "And as we continue to have the discussion with (them) about hopefully adding an SUV line in Chattanooga, that their decision there obviously would like to be something we would like to discuss with them."

Marc Trahan, executive vice president of quality for Herndon, Va.-based Volkswagen Group of America, said Tuesday that the company will decide by the end of this year where to build a new seven-passenger SUV.

Trahan said Chattanooga had the lead over factories in Mexico. He would not discuss whether the UAW effort in Chattanooga would influence that decision. The company announced earlier this month that it was in talks with the UAW about establishing a works council at the plant.

Haslam said his preference would be for the workers at the VW plant to hold a secret ballot on whether to join the union, rather than the company simply accepting UAW representation on the basis of a majority having signed union cards.

"We believe strongly in the right of people being able to vote privately on anything," he said.

Haslam and other southern Republicans have raised concerns that if the UAW were successful in organizing the VW plant, other manufacturing companies could shy away from the region.

"We've have several prospective companies say that decision will impact whether we choose Tennessee or somewhere else," Haslam said. "And because that we've said we did have a vested interest beyond just what happens at the plant in Chattanooga."