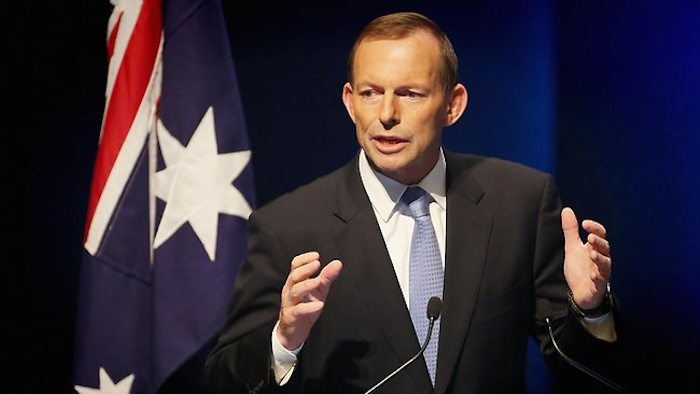 "I certainly want to try to ensure that we keep Toyota in this country," Abbott told Australian Broadcasting Corp. in an interview, saying he spoke with Toyota Australia chief Max Yasuda on Wednesday night after the company hinted it might be next.

In a statement issued after GM's announcement that it will close its two plants in Victoria and South Australia by the end of 2017 and cut some 2,900 jobs, Toyota said, "This will place unprecedented pressure on the local supplier network and our ability to build cars in Australia."

"We will now work with our suppliers, key stakeholders and the government to determine our next steps and whether we can continue operating as the sole vehicle manufacturer in Australia," it said.

Abbott suggested, however, that Toyota's manufacturing presence in Australia is more viable than that of GM considering that its plant in Victoria has "higher volumes and higher exports."

Also to Toyota's credit, he said, the Japanese company is ready to "level with" its Australian workers on what is needed for the company to succeed in an extremely tough environment.

"They have been prepared to say to their workforce, 'look, we need to be competitive, we need to try to ensure that we can be just as productive as workforces in other parts of the Toyota global network'."

In explaining GM's decision to end manufacturing in Australia, the company's head Dan Akerson cited a "perfect storm of negative influences the industry faces in the country."

He cited the relentless appreciation of the Australian dollar over the past decade, the high cost of production here and the auto market being "arguably the most competitive and fragmented" in the world."

Ford announced in May that it would end manufacturing in the country in October 2016. Mitsubishi Motors Corp. exited in 2008.

Regarding government incentives that might encourage Toyota to stay, Abbott said, "There is money on the table. There's something like a billion dollars available to the motor industry over the next couple of years. This is very substantial assistance and look, it's there and it's available for motor manufacturing in this country."

"I think that under the right circumstances there's no reason why Toyota can't continue and certainly, the assistance that was available yesterday is available today and I certainly hope that Toyota can continue," he said.

Industry Minister Ian Farlane, in a separate interview with ABC, said the over A$1 billion (US$903 million) available to the industry between now and 2020 "will go to Toyota and to the component industry."

"The money is there, the government is committed to that money. What we need to do is make sure that money is spent in a way that ensures that the car industry survives here," he said.

Farlane said that while Toyota has indeed been put into a difficult situation as a result of GM's decision, "The reality is that they're a company that focuses both on domestic consumption and export. They're in fact exporting more vehicles than they sell here in Australia. They produce a global car."

Noting that only one in eight Australians buy a vehicle made in Australia, he said, "If you look at the other companies, very much writ large in their demise is a failure to export vehicles."

According to Toyota Australia, more than half of the Camry hybrid and Aurion passenger vehicles manufactured at the company's plant in Altona, Victoria, are exported overseas -- to 13 markets in the Middle East, New Zealand and the Pacific Islands.