Ford is building a sixth plant in China as part of an effort to increase its sales in the world's largest auto market. Ford CEO Alan Mulally attended a groundbreaking ceremony Monday for the new $600M assembly plant in the city of Chongqing. It will have the capacity to make 250,000 vehicles per year when it's finished in late 2014. 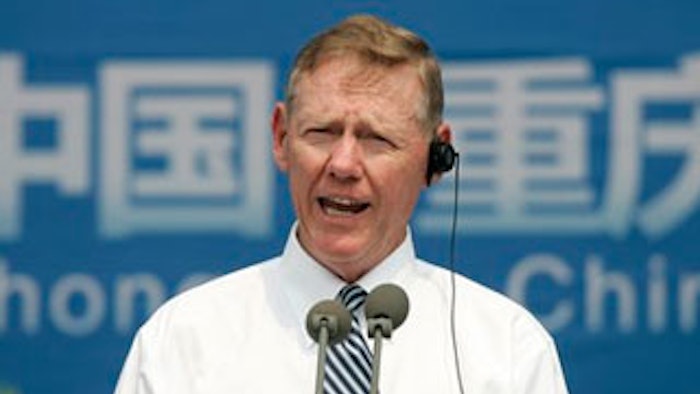 CHONGQING, China (AP) — Ford Motor Co. is building a sixth plant in China as part of an effort to increase its sales in the world's largest auto market.

Ford CEO Alan Mulally attended a groundbreaking ceremony Monday for the new $600 million assembly plant in the southwestern city of Chongqing. It will have the capacity to make 250,000 vehicles per year when it's finished in late 2014.

The plant is Ford's third in Chongqing, including one that began producing the Ford Focus in February. Ford plans to double its production capacity in China to 1.2 million vehicles by 2015, making this the company's most rapid expansion in 50 years.

China's auto market last year overtook the U.S. as the world's largest, with sales up 32 percent to more than 18 million vehicles. The pace has slowed this year, to an increase of just 2.9 percent in the first six months, but the Chinese market is still expected to be the largest in the world.

"Asia Pacific is such a fantastic growth market, even though it has slowed a little bit," Mulally said.

Sales are expected to grow in the coming years as more rural Chinese buy cars for the first time. Even with 30 million cars on the road, China still has just 28 vehicles for every 1,000 people, far below the U.S. level of 800. Some 80 percent of purchases are by first-time buyers.

But Marin Burela, president and CEO of Ford's joint-venture partnership, Changan Ford Mazda Automobile Co., said Ford has grown exponentially since 2003 when it sold just 17,000 vehicles in China. New products and more dealerships will help the company gain market share, he said, especially in the fast-growing cities in western China. Ford had 340 dealerships in China at the end of 2010; it expects to double that by 2015.

Also Monday, Ford confirmed that a plan to drop Mazda from the joint-venture partnership won regulatory approval from China's National Development and Reform Commission. The plan must still be approved by the Ministry of Commerce. Ford wants to change the joint-venture structure so that it has a 50-percent share with Chinese automaker Changan Automotive, versus the 35-percent share it now has with Mazda as a partner.

Lin Zou, 37, a medical researcher at a children's hospital in Chongqing, said she bought a red, two-door Ford Focus sedan five years ago because the brand was well-known and she considers U.S. cars to be safe. She also has a friend at a dealership in Chongqing, where many of her friends also drive Fords.

"If something goes wrong, I thought it would be very easy to repair because it's from Chongqing," she said.

The only negative: Her older Focus doesn't get very good gas mileage. But she says she'll consider Ford SUV when it's time for her to buy a new vehicle.