Part of a Boeing factory was evacuated for hours Tuesday after a threatening note was found, but a police search turned up nothing suspicious. About 500 employees had to leave the part of the factory where the H-47 Chinook helicopter is made, according to spokesman Damien Mills, who declined to elaborate on the nature of the threat. 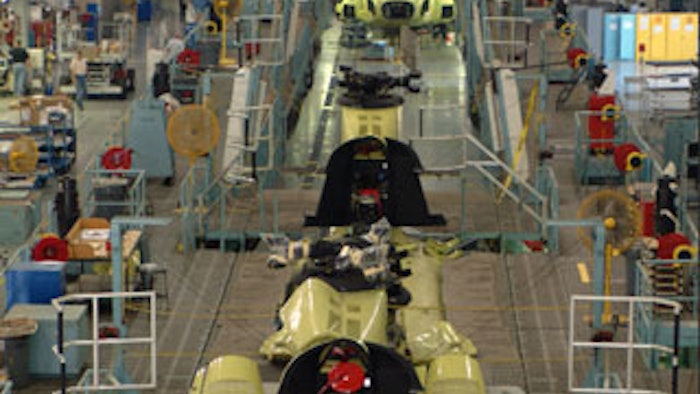 RIDLEY PARK, Pa. (AP) — Part of a Boeing Co. factory outside Philadelphia was evacuated for hours Tuesday after a threatening note was found, but a police search turned up nothing suspicious.

About 500 employees had to leave the part of the factory where the H-47 Chinook helicopter is made, according to Boeing spokesman Damien Mills, who declined to elaborate on the nature of the threat. Police said the note was found in a bathroom.

Of the first-shift employees who were forced to leave between 7:30 a.m. and 8:30 a.m., some went home and others were able to work from different parts of the sprawling Ridley Township plant, southwest of Philadelphia.

Throughout the day, police searched the building but found nothing suspicious, Mills said. Second-shift workers returned around 2:30 p.m. and production resumed.

Doc Price, 63, who works as an aircraft tech on the Chinook, said employees were simply told, "Everyone, out of the building."

Asked if there was any word on who left the note, Price said he didn't know, but added that "somebody probably made a major mistake."

The factory, which also makes the V-22 Osprey, has had a history of troubles.

Last year, federal agents raided it and charged more than three dozen people with distributing or trying to get prescription drugs, among them powerful painkillers.

In November 2008, Boeing temporarily shut down two production lines after a plastic cap was found in the fuel line of an in-production Osprey. The company later submitted a corrective action plan and restarted production.

In May 2008, the plant was shut down when a disgruntled employee clipped about 70 electrical wires in a nearly finished Chinook. The worker, Matthew Montgomery, of Trevose, pleaded guilty to destroying property under contract to the government. Authorities said he was upset about a job transfer.