Ford pressed ahead Thursday with its plan to slash production in Europe, announcing another plant closure and 1,500 more job cuts, as it warned that annual losses in the region will exceed $1.5B this year and next. Ford is struggling in Europe, like many major carmakers, because there are too many plants, labor costs are relatively high, and demand for cars is sliding due to the economic crisis. 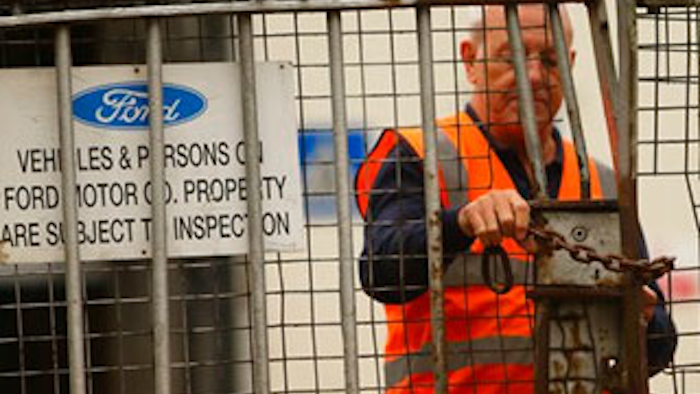 LONDON (AP) — Ford pressed ahead Thursday with its plan to slash production in Europe, announcing another plant closure and 1,500 more job cuts, as it warned that annual losses in the region will exceed $1.5 billion this year and next.

Ford Motor Co. is struggling in Europe, like many major carmakers, because there are too many plants, labor costs are relatively high, and demand for cars is sliding due to the economic crisis. Worries about its European business have dragged down Ford's stock price this year.

A day after announcing the closure of a major plant in Belgium, Ford said it would also close its transit van plant in Southampton, Britain, and the stamping and tooling facility at its plant in Dagenham, east London.

The actions announced this week — along with a previously announced initiative to cut about 500 salaried and agency positions across Europe — affect a total of 6,200 Ford jobs, or about 13 percent of the company's European workforce.

Counting the indirect impact on suppliers that depend on doing business with Ford's factories, the plant closures will cause about 11,000 job losses.

"We recognize the impact our actions will have on many employees and their families in Europe, and we will work together with all stakeholders during this necessary transformation of our business," said Ford's president and CEO, Alan Mulally.

"This announcement has been handled disgracefully," McCluskey said "Only a few months ago Ford was promising staff a new transit model for Southampton in 2014."

The company said it needs to cut costs in Europe, where it will try to refocus its operations on fuel efficient motors and safety technologies.

It expects the European business to return to profitability by mid-decade, both thanks to the plant closures and the introduction of new models.

Despite the losses in Europe, Ford still expects a strong pretax profit this year for the company overall. Earnings will be better in the third quarter than in the second, when excluding one-time costs and gains.

The Southampton plant, which employs 500 workers and will be shut in July, is Ford's last vehicle assembly plant in Britain. Production there has fallen from 66,000 vehicles in 2008 to 28,000 last year. Transit van production will be consolidated at the plant in Kocaeli, Turkey.

At the Dagenham plant, where it will close stamping facility in 2013, Ford promised to invest in the production of a new series of 20-litre, four-cylinder, low-CO2 diesel engines. It will also invest at the Bridgend plant in Wales to support gasoline engine manufacturing.

Chief Financial Officer Bob Shanks said that with its proposed plant closures, the use of its European production capacity would jump from about 65 percent to more than 80 percent.

Talks with Belgian unions will take four to six months by law. In the U.K., Ford aims to achieve employee reductions through voluntary means, employee separation programs and redeployment to other Ford locations.

Shares in Ford were up about 2 percent to $10.37 on Thursday, though they remain down for the year. The problems in Europe have weighed on the stock as investors worried about the drop in sales and the need to close unused plants.

Ford's sales were down 14.9 percent in September compared with a year ago, worse than the 10.8 percent fall for all European vehicle brands, according to Acea, the European carmakers' association.

Ford is not the only company struggling with the car market in Europe. Big names like General Motors Co., which owns the Opel brand, as well as Fiat, which owns Chrysler, have said that production must be slashed in Europe.

France's PSA Peugeot-Citroen is currently in talks to take a €7 billion lifeline from the French government, which wants to avoid layoffs.

Ford of Europe Chief Stephen Odell said the French government's aid might not comply with European laws. But more broadly, he said, it doesn't help Europe address its market issues.

"In the end, and this is my view, I don't think it's sustainable for support from government to keep companies competitive going forward."

Odell said it is likely European car sales could be even lower next year than this year.

"Frankly, we do need to see some signs of economic recovery, or at least stability," he said.