Can The New Corvette Save GM?

It looks part Ferrari, part Batmobile. But can this superhero save GM? Auto industry analysts and mainstream media predict the 2014 Corvette Stingray will have all sorts of extraordinary, megastar powers. One of them could be the power to revive a parent company that, less than four years ago, had the fourth-largest bankruptcy filing in U.S. history. 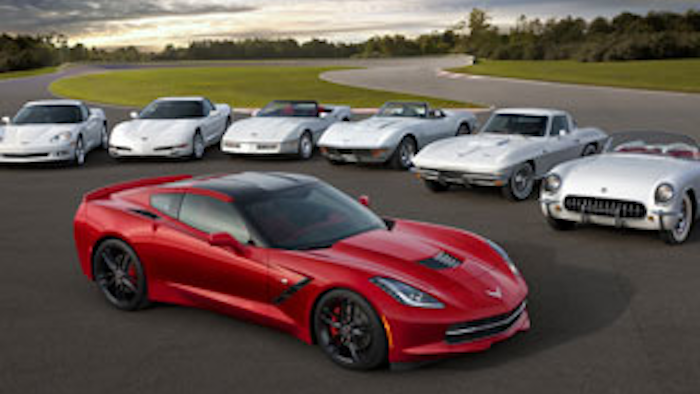 NASHVILLE, Tenn. (AP) — It looks part Ferrari, part Batmobile. But can this superhero save GM?

Auto industry analysts and mainstream media predict the 2014 Corvette Stingray will have all sorts of extraordinary, megastar powers.

One of them could be the power to revive a parent company that, less than four years ago, had the fourth-largest bankruptcy filing in U.S. history.

The GM plant in Spring Hill will reap the benefits as well, building the front and rear bumpers for the storied vehicle. The company has not announced how many Spring Hill workers will be involved, but Mayor Michael Dinwiddie sees promise in the development.

"It will bring more jobs to support that operation," Dinwiddie says. "We'd like to see that plant running three shifts, fully-staffed and operating as the crown jewel of General Motors in the future, so everything that goes in there helps."

But expectations aren't just for reviving GM. The Corvette mystique goes beyond one company, one brand.

"The 'Vette, that most aspirational dream car for heartland buyers, may be a bellwether for America's recovering car industry and economy: when middle-class strivers feel flush enough to splurge on Corvettes again, the good times may be about to roll," The New York Times gushed.

They certainly are for Baltimore Ravens QB Joe Flacco, who got a 2014 Corvette Stingray as his reward for being named this year's Super Bowl MVP.

At the center of all this excitement, of all these high expectations, is a huge, decades-old assembly plant on 212 acres just off I-65 near Bowling Green, Ky., just 29 miles north of the Tennessee border.

Leading the charge - and bearing much of the weight of those heavy expectations - will be plant manager Dave Tatman, who landed in Bowling Green after working at 12 other car plants on three continents.

"The early returns from the day of the reveal to the auto show to now, dealers are telling us that people are lining up to put a deposit down on this car. We anticipate pretty high demand for this car," says Tatman, who declines for "competitive reasons" to be specific about sales projections.

"I anticipate that we're gonna hit the ground running pretty hard, for sure. There's an excitement for the Corvette Stingray that we haven't seen."

The key to the success of the C7 (seventh-generation Corvette) and its ability to revitalize GM will be Chevy's ability to make the new Stingray desirable to young, affluent buyers.

"A lot of young people these days look at environmental sustainability. Some are living without cars and using public transit," Borchers says. "It's a different era.

"Those who do use cars are interested in different things, like how do the electronics work? How do I connect my iPhone to this car?" he says. "So those things made the 1960s-, '70s-era Corvettes such a hot vehicle and society has changed.

"Being Grandpa's performance vehicle is very much the concern. They would obviously like to have a younger customer base. This car is not going to do that unless they can reimage that."

"We think obviously with the technology we've loaded in the car, we hope to attract an entirely new demographics to our car," Tatman says.

The car - which has no price tag yet - hits the market in the third quarter, and only then will analysts be able to assess how far reaching the Corvette Stingray's revitalization powers will be. Current Corvettes range from $49,000 to more than $100,000, and Tatman says the C7 will be in that range.

The C7 already is having an impact in the Bowling Green area.

The assembly plant is growing from 512 to around 700 employees, and the company has already invested more than $130 million in changes needed to produce the new Stingray.

And the current line rate of eight cars an hour could double with those modifications.

In addition, GM is moving a custom engine building operation from Michigan to Bowling Green, adding another 20 jobs.

"It's the only place in the world that you could come build your engine, and we'll put it into your car for you while you're here," Tatman says.

In fact, most anyone can go to the assembly plant to watch Corvettes being built, and some 50,000 people a year do just that. With the C7, Chevrolet officials predict that number will go even higher.

It's all good news for the not-for-profit National Corvette Museum next door.

More than 30,000 people watched the online reveal of the new Stingray on the museum's website, which is the same traffic the site usually gets in a month.

"Social media didn't exist like it does for this generation," Frassinelli adds. "People share opinions and pictures, and that definitely makes the excitement more."

Plus, she says, the car simply looks more exciting.

"This Corvette is more like a race car than any other model prior," she says. "The features are made to be very high end. It's very racy looking."

Still, Borcher says observers need to remember there is always a sales bump and enthusiasm around a new product. And it always fades.

"It's sizzle," he says. "Every car company is coming up with new models, they sell good for a while and then they slow down."

And, he says, even if the new Corvette shows a significant jump in sales, it represents little of GM's total sales.

Tatman says total annual sales could actually go up more, from 13,000 a year to nearly double that.

And this latest factory improvement is another step in anchoring the world's only Corvette manufacturing plant to Bowling Green for the long haul.

"It's a great testimony to how GM feels about the community of Bowling Green and the Commonwealth of Kentucky that we would invest in such a substantial way in a factory here," Tatman says.