Business orders for long-lasting manufactured goods shot up by the largest amount on record in July but much of the strength came from a huge surge in demand for commercial aircraft. Outside of transportation, orders actually fell. 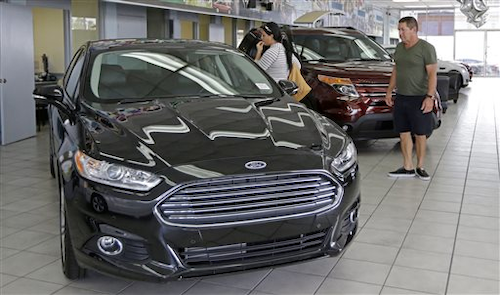 WASHINGTON  — Business orders for long-lasting manufactured goods shot up by the largest amount on record in July but much of the strength came from a huge surge in demand for commercial aircraft. Outside of transportation, orders actually fell.

Orders for durable goods rose 22.6 percent in July on a seasonally adjusted basis, the largest one-month gain on record, the Commerce Department reported Tuesday. The strength came from a 318 percent increase in orders for civilian aircraft which helped lift orders for transportation equipment by a record 74.2 percent.

Excluding transportation, orders fell 0.8 percent, and a key category that serves as a proxy for business investment plans dropped 0.5 percent, but this dip came after a sizable 5.4 percent rise in the previous month.

The huge jump in commercial aircraft orders reflected a good month for Boeing, which reported 324 orders for new aircraft in July, up from 109 orders in June. And this week, the company said it received an $8.8 billion order from an aircraft leasing company based in Singapore.

Automakers also had a good month in July, seeing orders for motor vehicles and parts rise by 10.2 percent following a 1.3 percent drop in June.

But outside of transportation, orders fell by 0.8 percent, the biggest drop in this category since a 1.7 percent decline in December.

Orders for non-defense capital goods excluding aircraft, a category viewed as a good proxy for business investment, edged down 0.5 percent after having risen 5.4 percent in June and dropping 1.4 percent in May.

Orders for machinery fell 1.8 percent while orders for computers and other electronic products dropped 1.2 percent and demand for primary metals such as steel dipped 0.3 percent.

Despite some weakness in July, analysts believe that stronger factory output will support economic growth in the second half of this year.

After going into reverse during the first three months of the year, in large part because of the severe winter, the economy rebounded in the April-June quarter, growing at a solid annual rate of 4 percent as measured by the gross domestic product, the economy's total output of goods and services.

The government will revise its first estimate of GDP on Thursday. Many economists believe that the figure will be revised down slightly but remain at a still-strong 3.9 percent growth rate. Economists expect strength in employment, manufacturing and consumer spending to support healthy growth of around 3 percent in the second half of this year.

Factory output rose for the sixth consecutive month in July, increasing by 1 percent, led by a jump in production of motor vehicles, furniture, textiles and metals.

In another sign of strength in manufacturing, the Institute for Supply Management reported that its manufacturing index climbed to a reading of 57.1 in July, the highest level since April 2011 and up from a June reading of 55.3. Any reading above 50 signals that manufacturing activity is growing.