A proposal to export twice as much Wyoming wind power to Los Angeles as the amount of electricity generated by the Hoover Dam includes an engineering feat even more massive than that famous structure: Four chambers would be carved from an underground salt deposit to hold huge volumes of compressed air in caverns in central Utah. 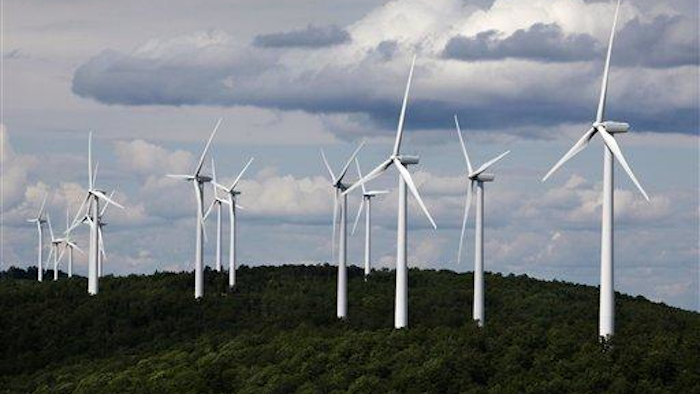 A proposal to export twice as much Wyoming wind power to Los Angeles as the amount of electricity generated by the Hoover Dam includes an engineering feat even more massive than that famous structure: Four chambers, each approaching the size of the Empire State Building, would be carved from an underground salt deposit to hold huge volumes of compressed air.

The caverns in central Utah would serve as a kind of massive battery on a scale never before seen, helping to overcome the fact that — even in Wyoming — wind doesn't blow all the time.

Air would be pumped into the caverns when power demand is low and wind is high, typically at night. During times of increased demand, the compressed air would be released to drive turbines and feed power to markets in far-away Southern California.

It's a relatively simple concept proven decades ago on a much smaller scale by utilities in Alabama and Germany. Yet, experts said Wednesday there's a reason similar projects don't exist elsewhere: The technology known as "compressed air energy storage" is expensive, particularly when stacked against other power sources such as cheap, natural gas.

"Stored energy technically is wonderful stuff. But it's primarily the capital costs that get you," said Brendan Kirby, a private consultant and former senior researcher at the Oak Ridge National Laboratory. "If it made a lot of economic sense, you'd be seeing these projects duplicated."

Still, Kirby and other experts added that the concept holds great promise for broader application as expenses drop, wind power capacity expands and West Coast utilities look to Rocky Mountain states to supply more electricity. It also could help rebut renewable energy skeptics who point to the variability of wind power as reason enough to stick with fossil fuels.

From there, the electricity would go to California, a state that requires one-third of its power to come from renewable sources, such as wind and solar.

A megawatt is enough electricity to provide power to roughly 600 to 1,000 homes.

Batteries big enough to serve the grid can meet the requirement, but compressed air storage is a much better option, said Loyd Drain, executive director of the Wyoming Infrastructure Authority, an agency that promotes power line development to export electricity generated in the state.

"Battery storage is very expensive, very inefficient. The second you put a charge into a battery it starts to discharge. You lose a lot of power," Drain said. "But energy storage, like compressed air storage, you can store that and not lose any energy."

The air would be pumped into four caverns, each 1,300-feet high and 290-feet wide and capable of holding enough air to generate 60,000 megawatt-hours of electricity through turbines at the surface.

"It's probably one of the only salt formations in the West that lends itself to compressed air energy storage of any scale bigger than a very small facility. It's a very large salt formation, very deep," Chris Jones, managing director of business development for Duke-American Transmission, one of four partners in the project, said Wednesday.

To excavate the caverns, the companies will pump fresh water into the salt deposit, which geologists call a "salt dome," to gradually dissolve out the caverns. Magnum Energy, another partner in the project, already has used that process at the site to create two large caverns that can each store up to 2 million barrels of propane or butane.

As the caverns get bigger, salt water is pumped to the surface to dry, leaving behind salt that can be sold for a variety of purposes, including road salt, said Magnum Energy spokesman Rob Webster.

"From the surface, it would look not different from an oil or gas well, with a big wellhead sitting on top of it and not really much else to see," Webster said.

While huge salt domes are rare onshore in the West, they're common in the Gulf of Mexico. Oil and gas companies excavate them to store natural gas using the same method.

Magnum Energy expects to begin the two-year process of excavating the caverns in 2016. Once completed with all equipment in place, the facility will cost an estimated $1.5 billion.

Paul Denholm, an analyst at the National Renewable Energy Laboratory in Boulder, Colorado, who has analyzed the economics of wind energy storage, said even though high costs have tripped up other projects, that won't necessarily be the case in Utah.

"The thing that makes this one different is that wind keeps getting cheaper and cheaper in price," he said. "Every year that we move along the economics look more favorable."