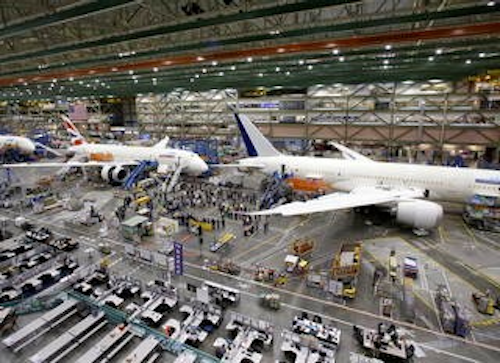 “The past relationship between the PMI and the overall economy indicates that the average PMI for January through November (55.8 percent) corresponds to a 4.2 percent increase in real gross domestic product (GDP) on an annualized basis,” says Bradley J. Holcomb, CPSM, CPSD, chair of the ISM Business Survey Committee. “In addition, if the PMI for November (58.7 percent) is annualized, it corresponds to a 5.1 percent increase in real GDP annually.”

ISM’s New Orders Index registered 66 percent in November, an increase of 0.2 percentage point when compared to the 65.8 percent reported in October, indicating growth in new orders for the 18th consecutive month. A New Orders Index above 52.1 percent, over time, is generally consistent with an increase in the Census Bureau’s series on manufacturing orders (in constant 2000 dollars).

ISM’s Production Index registered 64.4 percent in November, which is a decrease of 0.4 percentage point when compared to the 64.8 percent reported in October, indicating growth in production for the ninth consecutive month. An index above 51.1 percent, over time, is generally consistent with an increase in the Federal Reserve Board’s Industrial Production figures.

“Production is always geared toward full utilization of labor on-hand, as well as asset availability,” notes Holcomb. “So it’s using all of its existing labor to produce as much as it can in view of those strong orders, but the backlog of orders has crept up 2 points. That promises to flow into December where we would expect to have another good month as a result.”

The Inventories Index registered 51.5 percent in November, which is 1 percentage point lower than the 52.5 percent registered in October, indicating raw materials inventories are growing for the fourth consecutive month. An Inventories Index greater than 42.8 percent, over time, is generally consistent with expansion in the Bureau of Economic Analysis’ (BEA) figures on overall manufacturing inventories (in chained 2000 dollars).

“The Inventories Index is a reflection on that strong production number just eating off inventories,” says Holcomb. “I think inventories are a little lower than manufacturers would like in view of those strong new orders. Their comments, which are more forward looking, seem to be very optimistic. I think the Inventories number is a reflection of supplier deliveries slowing even faster — and that’s a good sign in this environment where it shows tightness in the supply chain up and down.”

ISM’s Employment Index registered 54.9 percent in November, which is a decrease of 0.6 percentage point when compared to the 55.5 percent reported in October. This is the 17th consecutive month of growth in employment. An Employment Index above 50.6 percent, over time, is generally consistent with an increase in the Bureau of Labor Statistics (BLS) data on manufacturing employment.

“In the mid-50s, it’s down just a bit from last month, but still in a very nice position,” explains Holcomb. “It’s growing for 17 consecutive months that should translate into some solid numbers later on in the week from the government.”

ISM’s New Export Orders Index registered 55 percent in November, which is 3.5 percentage points higher than the 51.5 percent reported in October. November’s reading reflects growth in the level of exports for the 24th consecutive month.

ISM’s Imports Index registered 56 percent in November, which is 1.5 percentage points higher than the 54.5 percent reported in October. This month’s reading represents 22 consecutive months of growth in imports.

“The only downside to the encouraging ISM report is that the manufacturing trade deficit continues to worsen, as imports are growing faster than exports,” cautions Daniel Meckstroth, chief economist for the MAPI Foundation, the research affiliate of the Manufacturers Alliance for Productivity and Innovation. “But even in the trade indicator there was some improvement. The export index rose from 51.5 in October to 55 in November, suggesting that export growth has picked up.

The ISM Prices Index registered 44.5 percent in November, which is a decrease of 9 percentage points compared to the October reading of 53.5 percent. In November, 14 percent of respondents reported paying higher prices, 25 percent reported paying lower prices, and 61 percent of supply executives reported paying the same prices as in October. This is the first time that raw materials prices have registered a decrease since July 2013 when the Prices Index registered 49 percent. A Prices Index above 49.7 percent, over time, is generally consistent with an increase in the Bureau of Labor Statistics (BLS) Producer Price Index for Intermediate Materials.

"The drop in the Prices Index are driven by oil, gas and energy in general," says Holcomb. It’s good it two ways, because it costs less to run our plants and it also reflects in lower cost of many raw materials. Its definitely good for manufacturing, as well as for consumers that will have some of this benefit passed on to them."

The November ISM report is a very positive sign that the economic expansion is fundamentally solid because the manufacturing base is growing.  “We expect consumer-driven manufacturing to provide a solid base for manufacturing production growth that will be enhanced by strong business equipment spending and a rebound in material manufacturing. The MAPI Foundation predicts that manufacturing industrial production will grow 3.5 percent in 2015 and 3.9 percent in 2016. The expected pace of growth is faster than the growth rate of the overall economy,” concludes Meckstroth.