None of the 12 minicars tested got the highest rating of "good" from the Insurance Institute for Highway Safety. The Chevrolet Spark was the only car that earned the second-highest rating of "acceptable." Six of the cars — including the segment's best-seller, the Nissan Versa — got the lowest rating of "poor." 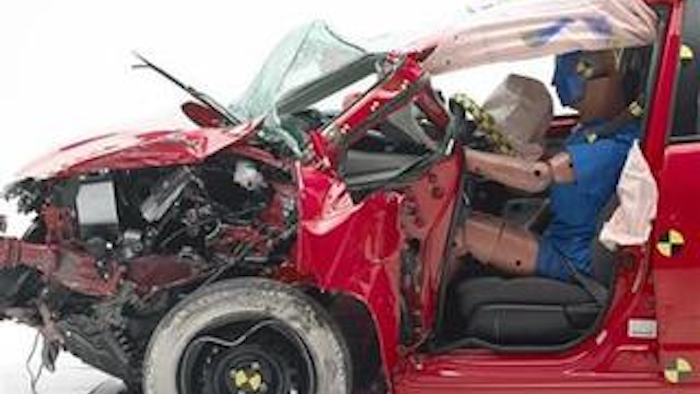 None of the 12 minicars tested got the highest rating of "good" from the Insurance Institute for Highway Safety. The Chevrolet Spark was the only car that earned the second-highest rating of "acceptable." Six of the cars — including the segment's best-seller, the Nissan Versa — got the lowest rating of "poor."

"Small, lightweight vehicles have an inherent safety disadvantage. That's why it's even more important to choose one with the best occupant protection," said Joe Nolan, IIHS's senior vice president for vehicle research.

The institute's small overlap test, which was introduced in 2012, mimics what happens when a car's front corner collides with another vehicle or an object like a utility pole. In the test, 25 percent of a vehicle's front end on the driver's side strikes a rigid barrier at 40 mph.

The test differs from the U.S. government's frontal crash test, in which a car strikes a rigid barrier head-on at 35 mph.

IIHS says hitting only part of the front end makes it harder for cars to manage the energy from a crash. In several of the subcompacts, the structures collapsed, which can exacerbate injuries because the air bags, seats and other parts get knocked out of position.

In the test of the Honda Fit, for example, the steering column pushed so far into the vehicle that the dummy's head slid off the air bag and hit the instrument panel. IIHS said the Fit was one of the worst performers in terms of potential injuries to the driver.

Honda responded that the 2015 Fit, which goes on sale in a few months, should earn a top score on the small offset test. The recently redesigned Honda Civic, which is one size up from the Fit, is among five small cars with "good" ratings on the test. A four-door Civic is around 300 pounds heavier and 18 inches longer than the current four-door Fit.

The current Fit does get top scores in the institute's other four tests, including measurements of roof strength and side impact protection.

IIHS said the Fiat 500 was also one of the worst performers. The crash force ripped the door hinges off the 500, causing it to fall open during the test.

Spokesman Eric Maybe said the Fiat 500 meets all government safety requirements and, like the Fit, gets "good" ratings in all four of the institute's other crash tests.

Cars with "marginal" ratings were the Kia Rio, Mazda2, Toyota Yaris and Ford Fiesta. Cars with "poor" ratings — in addition to the Fit, the Fiat 500 and the Versa — were the Toyota Prius C, Mitsubishi Mirage and Hyundai Accent.