The concept: to wean the world from oil and eliminate the biggest hurdles to environmentally friendly electric cars — high cost and limited range. 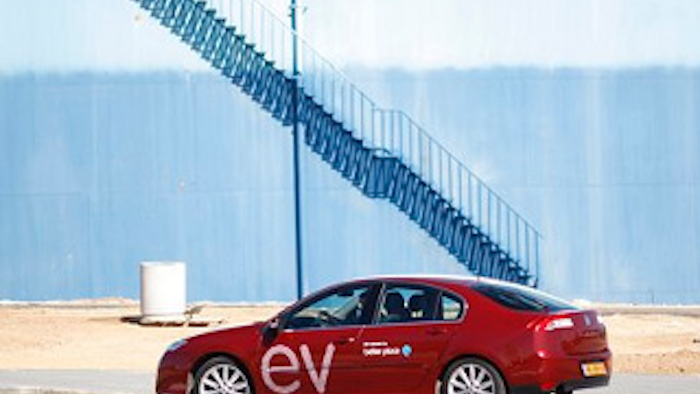 After more than $400 million in outlays and months behind schedule, dozens of electric cars have hit the road in Israel, the test site Agassi chose for his Better Place venture. Four stations where the cars can get a new dose of juice when their batteries run out are operating, and the plan is to ramp that number up within months.

The concept: to wean the world from oil and eliminate the biggest hurdles to environmentally friendly electric cars — high cost and limited range.

To do this, Better Place has jettisoned the fixed battery. Instead, drivers can swap their depleted batteries for fully charged ones at a network of stations, receiving a full, 160-kilometer (100-mile) range in five minutes. Better Place owns the batteries, bringing down the purchase price of the cars using the network.

People driving shorter distances, the vast majority of customers, can plug in their batteries each day to chargers installed at their homes, offices and public locations, which will fully recharge in six to eight hours.

He faces a wall of skepticism. A major concern is "range anxiety": Will the car conk out because its battery is drained, stranding the driver in a dicey neighborhood, en route to the hospital, or with three wailing kids in back?

Agassi, a former top executive at software giant SAP AG, said he is ready to prove his doubters wrong. "We're driving a car that most people said would be a fantasy," he said.

The swappable battery model aims to reassure drivers about range and show they don't need to sacrifice convenience or cash to switch to electric.

So far, the four Better Place battery stations are set up in central and northern Israel. During the second half of the year, around 40 stations are due to be operating across the country. But even before that, the company says enough will be up that a motorist could make the 500-kilometer (300-mile) drive from Israel's northern tip to its southern end.

Agassi has raised $750 million from investors including General Electric Co. and HSBC Holdings PLC since founding Better Place 4 1/2 years ago.

French automaker Renault has begun selling a sedan, the Fluence, customized to use the stations, priced in Israel at roughly $32,000, comparable to other sedans sold here. Currently, about 140 are on the road, most driven by Better Place employees.

The Fluence should start becoming available to the general public within weeks. Leasing companies, which buy about two-thirds of the more than 200,000 new cars sold annually in Israel, have ordered more than 1,800, and private customers have ordered several hundred more.

Compared to electric or hybrid cars in other markets, the sales numbers in this nation of nearly 8 million might not be as humble as they seem: In 2011, Chevrolet sold about 7,700 Volts and Nissan sold under 10,000 LEAFs in the U.S., which has a population of more than 310 million.

"It interests all fleet managers we talk to," said Shai Dahan, CEO of Eldan Transportation, a top Israeli leasing group.

Better Place, which had promised to have thousands of cars on the road last year, acknowledges the rollout is behind schedule, mostly because of bureaucratic hurdles and production issues at Renault.

Better Place has also spent years testing its integrated system designed to allow its operation center, which is connected to every car, to monitor the vehicles and correct problems remotely. For instance, its software notifies drivers when their batteries are running low and directs them to the nearest switching station.

Israel sales director Zohar Bali predicts up to 5,000 Fluences will be silently running on Israeli roads and highways within a year.

Israel was chosen for the experiment in part because of its tech-savvy population. Also, with 80 percent of the population living in a narrow, densely populated stretch along the Mediterranean coast, it provides a perfect laboratory for the charging network.

Better Place claims it can shave up to 20 percent off the annual cost of owning a car, especially if gas prices, now around $8 a gallon here, continue to rise. Drivers buy access to the switching stations and charging spots through a monthly package ranging from under $300 to over $500, depending on mileage.

Israelis are taking notice. Better Place says more than 80,000 people have trekked to its visitor's center, situated at an abandoned oil reserves depot outside Tel Aviv.

What happens in Israel could decide how broadly Better Place deploys.

So far the Fluence is the only model compatible with the grid, but Renault's Middle East director, Jean-Christophe Pierson, says the company is considering a more compact model. Better Place is also in contact with other carmakers.

Denmark is set to become Better Place's second launch site this year. Australia is to become its first major market, with deployment in the capital, Canberra, also this year. Small-scale projects are in place in Hawaii and California. Amsterdam is the next European target after Denmark.

The company also has its sights set on China, where it already has opened a demonstration battery switching station.

Agassi sees the "tipping point" for electric cars coming in two to three years, propelled by dropping prices of cars and batteries. By 2017, he expects 50 percent of all new car sales in Israel to be electric.

The largest investor is The Israel Corp., whose holdings include Israel's biggest oil refinery and deep water oil drilling.

Idan Ofer, whose family controls The Israel Corp. and who serves as Better Place's chairman, said he saw no contradiction between his oil and clean-tech holdings.

Film giant Kodak "knew about digital photography. And look what happened. They still went bankrupt because they didn't do anything about it," observed Ofer. "There are many examples. I don't want to be there."