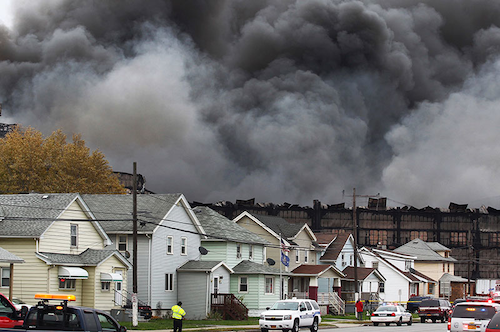 Smoke rises from a fire at a former Bethlehem Steel site, Wednesday, Nov. 9, 2016, in Lackawanna, N.Y. The blaze broke out when a hot light bulb fell onto cardboard inside a business, authorities said. (AP Photo/Jeffrey T. Barnes)

The structure went up in flames when a fire broke out inside a business Wednesday morning. The blaze spread quickly through a business where boats and vehicles were stored. It took firefighters hours to get it under control.

The cause remains under investigation.

People living near the site were forced to evacuate. Strzelczyk says some have returned but others are staying away because of possible health risks due to soot from the fire.