The National Transportation Safety Board and Federal Railroad Administration are investigating the crash. 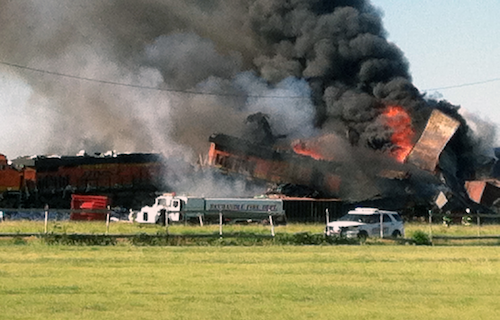 In this photo provided by Billy B. Brown, two freight trains are on fire Tuesday, June 28, 2016, after they collided and derailed near Panhandle, Texas. Texas Department of Public Safety Lt. Bryan Witt says the accident occurred Tuesday morning near the town of Panhandle, about 25 miles northeast of Amarillo. No injuries have been reported. (Billy B. Brown via AP)

DALLAS (AP) — The remains of two crew members who had been missing since a head-on freight train collision in the Texas Panhandle were found Wednesday, officials said, and the third missing worker is presumed dead.

The bodies were found in the wreckage of the two trains near the town of Panhandle, BNSF Railway spokesman Joe Faust said. One crew member is still missing, and a fourth jumped from one of the trains just before impact Tuesday; he is hospitalized with injuries that are not life-threatening, Faust said.

Work crews continued to pick through the tangled and smoldering wreckage of the smashed locomotives, rail cars and shipping containers near the town of Panhandle, about 40 miles northwest of Amarillo, he said.

The BNSF Railway freight trains were on the same track when they collided, triggering a fireball and causing containers and cars to tumble onto one another in a pileup.

One train had earlier stopped in Amarillo to refuel for its trip to Chicago, and that diesel fuel contributed to a fire that burned into the night, TexasDepartment of Public Safety Sgt. Dan Buesing said.

"You have two engines on each train with fuel and the eastbound train had stopped in the Amarillo yard and may have had extra fuel added for the trip out east," he said. The westbound train was headed to Los Angeles.

Freight cars and containers of consumer goods — such as paper products, clothing, television sets and computers — were strewn about 400 yards from the collision site, Buesing said.

It's not clear how fast the trains were traveling when they collided, but the speed limit in that area is 70 mph and BNSF spokesman Joe Faust said they were "traveling at less than track speed." It also wasn't clear why the trains were on the same track.

The National Transportation Safety Board and Federal Railroad Administration are investigating the crash.

BNSF has pledged to meet a 2018 federal deadline to adopt technology, called positive train control or PTC, that relies on GPS, wireless radio and computers to monitor train positions and automatically slow or stop trains that are in danger of colliding, derailing due to excessive speed or about to enter track where crews are working or that is otherwise off limits. At least three freight railroads have said they'll need an extension to 2020.

Faust said the collision is the type of accident PTC can prevent and that BNSF is "aggressively" pursuing it "across our network."

"While sections of the track operated by the eastbound train involved in this accident have PTC installed and are being tested, the section of track where the incident occurred will be installed later this year," he said in a statement released Tuesday.

In Washington, Transportation Secretary Anthony Foxx urged the railroad industry "to move as fast as they possibly can" to put PTC systems into operation.

"Folks don't have to wait until the deadline to get PTC compliant," he said Wednesday in response to a reporter's question about the collision.

Any collision is "a terrible event," he said. "Ones that technology could have helped us avoid remind us how critical it is to get this technology in place." 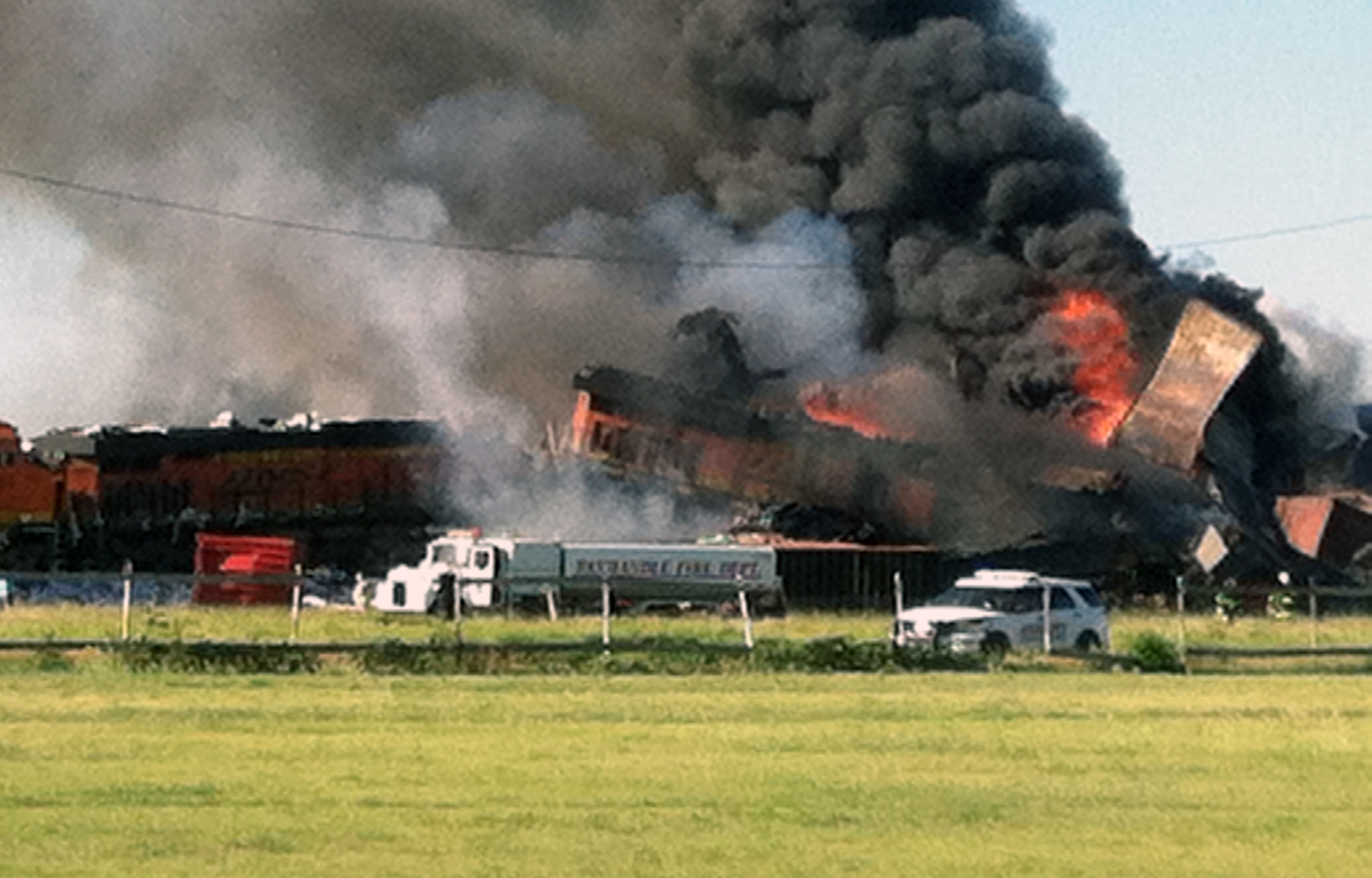 In this photo provided by Billy B. Brown, two freight trains are on fire Tuesday, June 28, 2016, after they collided and derailed near Panhandle, Texas. Texas Department of Public Safety Lt. Bryan Witt says the accident occurred Tuesday morning near the town of Panhandle, about 25 miles northeast of Amarillo. No injuries have been reported. (Billy B. Brown via AP)
Latest in Home