Prosecutors are requesting the maximum penalty of a year in prison and a $250,000 fine for convicted ex-Massey Energy CEO Don Blankenship, who ran a West Virginia coal mine that was the site of a 2010 explosion that killed 29 men. 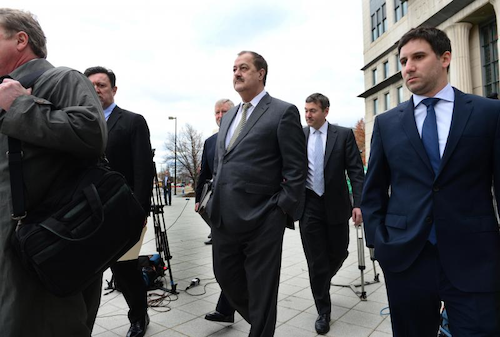 Don Blankenship, center, leaves the federal courthouse with his attorneys after the verdict in his trial in Charleston, W.Va., Thursday, Dec. 3, 2015. (Kenny Kemp/Charleston Gazette via AP)

CHARLESTON, W.Va. (AP) — Prosecutors are requesting the maximum penalty of a year in prison and a $250,000 fine for convicted ex-Massey Energy CEO Don Blankenship, who ran a West Virginia coal mine that was the site of a 2010 explosion that killed 29 men.

In a sentencing memorandum in federal court Monday, prosecutors said the one-year cap on prison time for conspiring to shirk mine safety laws is "woefully insufficient." But any shorter sentence for Blankenship could only be interpreted as a "declaration that mine safety laws are not to be taken seriously," prosecutors wrote.

Blankenship was convicted Dec. 3 of a misdemeanor conspiracy to willfully violate mine safety standards at Upper Big Branch Mine in southern West Virginia, where an explosion killed 29 men in 2010.

In their memorandum, Blankenship's attorneys say he shouldn't receive more than probation and a fine. They reiterated that they intend to appeal.

Blankenship's sentencing is slated for April 6, the day after the sixth anniversary of the Upper Big Branch disaster.

Prosecutors painted the mine as a "calamity in the making," poorly ventilated and covered in black coal dust that would easily ignite.

"There was no question what accumulations of coal dust meant if not properly treated: a powder keg 1,000 feet below the surface, primed to blow at any time," wrote Assistant U.S. Attorney Steven Ruby.

At the helm of a multibillion-dollar publicly traded company, the wealthy executive had the means to run the mine safely, but was greedy enough "to willfully imperil his workers' survival to further fatten his bank account," prosecutors wrote.

"He made a conscious, cold-blooded decision to gamble with the lives of the men and women who worked for him," Ruby wrote.

Blankenship's attorneys countered by providing dozens of positive letters from former employees, friends, family and members of the community.

"The defense never contested that Don Blankenship could be blunt and a hard taskmaster, but the truth is that he cares deeply about his family, his community, and the people who worked for him," wrote defense attorney Blair Brown.

They pointed to his humble roots, investments in the community and mine safety initiatives.

"All these huge public improvements didn't come with a big banner flying overhead that said, 'Donated by Don Blankenship and/or Massey Energy;' that's not how he has chosen to operate through the years," wrote Lisa Crum, who worked in human resources for one of Massey's contractors for about 18 years.

Her husband worked for a Massey-owned processing plant in Mingo County, W.Va.

Prosecutors are still fighting to force Blankenship to pay $28 million in restitution to Alpha Natural Resources, a now-bankrupt coal company that bought Massey in 2011. The money would cover legal fees, investigative expenses and fines incurred by Alpha. 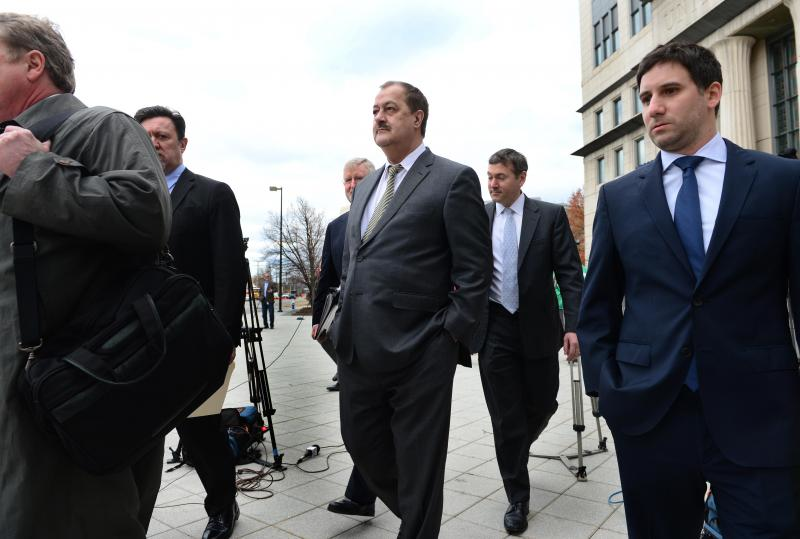 Don Blankenship, center, leaves the federal courthouse with his attorneys after the verdict in his trial in Charleston, W.Va., Thursday, Dec. 3, 2015. (Kenny Kemp/Charleston Gazette via AP)
Latest in Home