Dairy operations here and abroad have used robotic milkers for more than a decade. But with more manufacturers and dealerships emerging the U.S., the number of smaller farms in Iowa with the technology has doubled over the last two years, from roughly 20 to more than 40, and family farms in the Northeast also are plugging in. 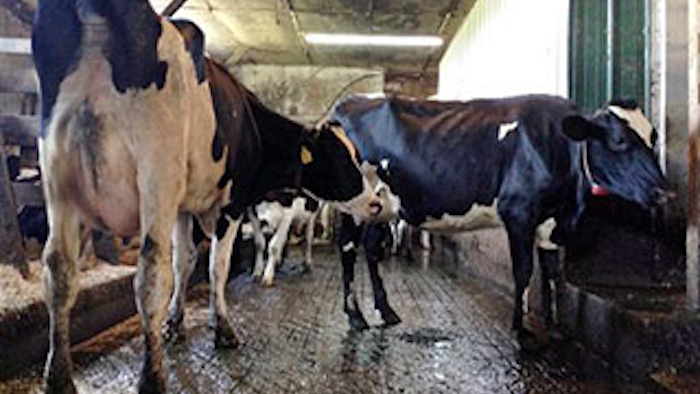 GRANITEVILLE, Vt. (AP) — Robots have taken up residence at some small- and medium-sized dairy farms across the country, providing reliable and more efficient labor and helping the businesses remain viable. Plus, farmers say, the milking technology makes for happier, more productive cows.

Dairy operations here and abroad have used robotic milkers for more than a decade. But with more manufacturers and dealerships emerging the U.S., the number of smaller farms in Iowa with the technology has doubled over the last two years, from roughly 20 to more than 40, and family farms in the Northeast also are plugging in.

The cost of not automating the milking process may be greater for some farmers than shelling out hundreds of thousands of dollars, experts say. The technology supplants paying for hard-to-find and migrant labor, creates time for other farm duties and collects vital data about the animals. Perhaps most of all, it boosts the number of gallons of milk being produced because cows get milked when and as often as they want, though it doesn't affect consumer milk prices.

The reason robots might make sense for many small- and medium-sized farms in the Northeast is because of the challenge of finding reliable workers and outdated infrastructure that makes the operations inefficient, said Richard Kersbergen with the University of Maine Extension.

"There's a lot of farmers that are interested but are concerned about the financial costs with it," noted Kersbergen, who just returned from studying farms in the Netherlands, where he said more than half used robotic milkers because of high labor costs.

But the price can be a high obstacle to clear. Jennifer and Jesse Lambert took out seven-year loans for about $380,000 last year to install two robots and retrofit a barn at their organic dairy farm in Graniteville. They were looking for a more consistent way to milk their cows, more time to spend with their newborn son and more money in their pockets. They're saving $60,000 a year that used to go to paying one full-time and one part-time employee and their cows are producing 20 percent more milk.

"No one wants to milk cows," Jennifer Lambert said. "Even when we had employees the last thing they wanted to do was milk cows, you know, and they especially didn't want to do it on the weekend."

Plus, cows thrive on consistency, she said, something farmworkers can't always provide but robots do, which she says leads to more relaxed cows.

When a cow wants to be milked, it steps up into a stall, grain is dumped in front of it and an arm reaches under its body to wash the teats. A laser scans the cow's body, and then the arm attaches a cup to each of the four teats, milking them individually. The technology also collects and stores data about each cow's production, body temperature, weight and number of visits to the milking system, which farmers can check on their computers.

Ron Lawfer's cows also have produced about 20 percent more milk since two robots were installed in December 2014. The 55-year-old figures he, his wife and son would have been out of the milk business in a couple of years if they hadn't built a new $2 million facility near the northern Illinois town of Kent to accommodate a growing herd and the milking technology. They spent $400,000 of that on robots and accessories.

"We weren't large enough to support two families ... basically that's what it boils down to, we were not efficient," he said.

But robots aren't for everyone, said Larry Tranel, a dairy specialist with the Iowa State University Extension.

"It's a technology that it's kind of scale-neutral in a sense because every robot can handle about 60 cows," he said, "and when you start going larger than that people figure out pretty quick that it's probably cheaper to hire the labor and put in a big parlor.

"It really becomes a money game."