Kellogg Co. reported a fourth-quarter loss of $293 million, after reporting a profit in the same period a year earlier. The Michigan-based company said it had a loss of 82 cents on a per-share basis. 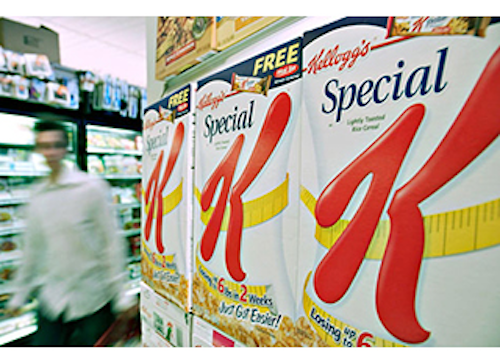 BATTLE CREEK, Mich. (AP) — Kellogg Co. (K) on Thursday reported a fourth-quarter loss of $293 million, after reporting a profit in the same period a year earlier.

On a per-share basis, the Battle Creek, Michigan-based company said it had a loss of 82 cents. Earnings, adjusted for non-recurring costs, came to 86 cents per share.

The results fell short of Wall Street expectations. The average estimate of analysts surveyed by Zacks Investment Research was for earnings of 92 cents per share.

The maker of Frosted Flakes, Pop Tarts and Eggo waffles posted revenue of $3.51 billion in the period, also falling short of Street forecasts. Analysts expected $3.65 billion, according to Zacks.

Kellogg shares have climbed slightly more than 1 percent since the beginning of the year, while the Standard & Poor's 500 index has stayed nearly flat. The stock has increased 12 percent in the last 12 months.

This story was generated by Automated Insights using data from Zacks Investment Research. Access a Zacks stock report on K at http://www.zacks.com/ap/K