Geoduck Farming Takes Off as Demand for Clams Grows in Asia

Last year, the U.S. exported $74 million, or about 11 million pounds, worth of live wild and farmed geoduck, mostly to China and Hong Kong. That's double the volume and value exported in 2008. An average clam weighs about 2 pounds and can fetch up to $100 per pound overseas. 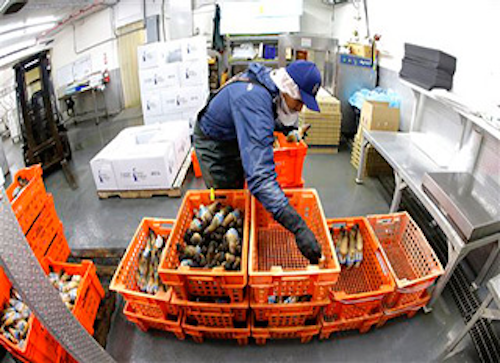 HARSTINE ISLAND, Wash. (AP) — John King plunges his arm up to his shoulder into the mudflats of Puget Sound, roots around and soon pulls from the muck the world's largest burrowing clam. The mollusk squirts water from its long obscene-looking neck. King dodges the spray, already using a water hose to loosen sand and harvest the next one.

Within hours, the geoduck (pronounced gooey duck) is packed live on ice at nearby Taylor Shellfish Farms — on its way to be served raw as sashimi or added to hot-pot dishes to satisfy a growing appetite for the unique Pacific Northwest delicacy.

"It's gained this luxury status. A big driver is the growing middle class in China," said Gina Shamshak, an assistant economics professor at Goucher College, who has researched the geoduck market. She added: "They want to consume the higher-valued seafood items, and geoduck is one of them."

Last year, the U.S. exported $74 million, or about 11 million pounds, worth of live wild and farmed geoduck, mostly to China and Hong Kong. That's double the volume and value exported in 2008. An average clam weighs about 2 pounds and can fetch up to $100 per pound overseas.

Demand in Asia is prompting shellfish farmers to grow more of the clams along Washington's private tidelands. Several new farms have been permitted in recent years, despite challenges from opponents concerned about plastic pollution, aesthetics and potential environmental harm.

And now, backed by new research showing mostly short-lived, localized environmental effects, the state is preparing for the first time to lease 15 acres of public tidelands for geoduck aquaculture.

The native geoduck, which comes from a Native American word meaning "dig deep," has been dug recreationally in Northwest intertidal areas for decades, and it thrives in the inland waters of Washington, Alaska and British Columbia.

But commercial harvests of wild clams didn't begin until 1970 in Washington, after divers discovered them aplenty in Puget Sound and lawmakers established a fishery. Commercial geoduck farming followed in the mid-1990s, really taking off in the last decade with modernized growing techniques.

Today, geoduck aquaculture represents one-tenth of the global geoduck market, and Washington claims 90 percent of that share, according to Shamsak.

"There are people interested in farming geoduck. There's a demand for them. It's lucrative," said Laura Hoberecht, an aquaculture coordinator with the National Oceanic and Atmospheric Administration. NOAA is working with local and state agencies to make the shellfish permitting process more efficient without reducing the protections, she said.

Raising these usual-looking clams isn't for the impatient, however. Growing geoducks from seed to market takes five to seven years and plenty of gear.

For Taylor Shellfish, the country's largest farmed shellfish producer, it begins at its hatchery on the Hood Canal where wild geoducks are coaxed into spawning eggs and sperm in a water tank. Once fertilized, microscopic larvae are fed algae, which the company grows itself on site, for several weeks.

Then it's off to a floating seed nursery in south Puget Sound. Thousands of tiny clams are placed in cages and lowered below the water's surface where they'll grow there for another year or so until it's time to be planted in the mudflats.

The half dollar-sized clams are planted several inches deep and protected for the first year or two by a 6-inch diameter PVC tube or mesh pipe inserted into the mud with several inches exposed. The pipe is covered with plastic netting or canopies to keep away birds, fish and other predators.

"It's relatively slow and steady. A big challenge has been getting these farms permitted," said Bill Dewey, a spokesman for Taylor.

One major roadblock has been opponents who have sued in court over concerns about potential environmental harm to salmon, eelgrass and other marine life.

"There's no limit on aquaculture. They want it all. At what point is there enough?" said Laura Hendricks, with Coalition to Protect Puget Sound Habitat. She worries the region's tidelands are turning into industrial farms and questions the long-term, cumulative impacts of intensive farming where thousands of clams are planted with plastic gear and nets.

"We didn't see a lot of impacts of geoduck aquaculture in the studies we performed," said P. Sean McDonald, a lecturer and research scientist at the University of Washington who co-authored several studies.

He said they found short-lived effects to some groups of animals in a few areas, mostly because nets and PVC tubes change the habitat dramatically, but the effects of harvest are mostly negligible and beaches appear to recover quickly afterward.

He noted that some unanswered questions remain including what happens to areas farmed year after year.

Dewey said Taylor and others have adjusted practices to respond to complaints, including trying out mesh nets instead of PVC pipes and switching to quieter pumps.

Back at Taylor's farm, workers race against the narrow window of extreme low tide one recent morning, scanning for little depressions in the sand, tell-tale signs of clams burrowed below. The harvesters are sunk up to their waists, working their hose to liquefy sand around the clam below and plopping them into orange crates.

Within hours the geoducks will be air-shipped, headed to restaurants in California and banquets tables in China.